Chad McBride, officially announced that he is a candidate for the Office of Sheriff in Anderson County.

During his announcement last Tuesday, McBride said he plans to be tough on crime and bring a new strategy to law enforcement in Anderson County, provide excellence in the service residents receive and bring a good strategy to improve response times and the quality of investigations.

McBride said he grew up in Anderson County and still resides here. “This is my home. This is where my family and I live, work and worship. The safety of my family is the most important priority and I would do anything and everything to protect them,” McBride said. “This is the foundation of my calling to serve as your sheriff. Every family in Anderson County deserves the peace of mind that their family, their investments, their way of life is secure from those who would do them harm or take from them.”

McBride has 14 years in law enforcement, serving as a uniform patrol officer, investigator, professional standards and internal affairs and as the former spokesman for the Anderson County Sheriff’s Department.

He is a veteran of the United States Army Reserves and the SC Army National Guard. He is an adjunct professor at Anderson University’s Criminal Justice Program where he instructs other Law Enforcement Officers. McBride is currently employed as the Director of Safety at New Spring Church.

“Each of these has afforded me the necessary combination of knowledge and abilities to serve as your Sheriff and ensure that each of us has a safe place to live, work, and play in our respective homes here in Anderson County,” he said.

McBride said that Anderson County has been going through some really rough times recently.

“You can’t cut on the local 6 o’clock news or look at the newspaper without finding out about a new crime. Law abiding citizens are just getting hammered every day by criminals. This has got to change,” he said.

“I have heard from both victims of crime and concerned citizens who are worried they will become a victim of crime and they both have one overwhelming frustration: There is a lack of response from the Sheriff’s office and a poor level of customer service that they feel slighted and ignored by the very Office that is supposed to provide for their safety. This is unacceptable and this MUST change!”

McBride said many citizens feel that their area has been neglected.

“There is no Law Enforcement presence and to them that equates to not feeling safe.”

McBride said the sheriff’s office has the highest turnover rate in its history, which he said is contributing to a decline in morale and service to the residents.

McBride said he does not blame current deputies and staff at the Anderson County Sheriff’s office for the current state of affairs.

“These systemic problems have arisen over the past 8 years with a stagnant culture of unchanging management, unchanging priorities, poorly mapped strategies and policies that have been coupled with zero accountability when benchmarks are not met,” he said.

“There has been no progressive planning and no way to gauge the smallest success or biggest failure.”

McBride said if he is elected, there will be an immediate top to bottom review of each and every function, department, and allocated resource within the Sheriff’s Office to insure its value in promoting safety.

“I will implement a 5 year plan to mark each and every improvement that we make. These benchmarks will allow all taxpayers to grade our service. In addition, it will allow both you, the taxpayer and receiver of services, and us, to truly validate our success and failures as we strive to meet our goals.”

McBride said as Sheriff, he will focus on progressive law enforcement planning, strong fiscal management, and cooperative relationships with our cities, municipalities and prosecutorial authorities.

He listed seven points to focus on:

He said he will be tough on crime. “I will be the toughest son of a gun on crime in the country. No one will be tougher…period,” McBride said.

He plans to use new strategies and advanced policing methods to upgrade the force. “Law enforcement has changed significantly over the last decade. I plan to use a more modern approach, with better investigation strategies and some good ole common sense to cut crime and scare off any new criminals from Anderson County.”

McBride said he plans to manage the Sheriff’s office like a business and be a trustworthy steward of taxpayer dollars.

“Progressive Planning, Accountability, and Efficiency are three keys to running a successful business. They are also the keys to providing excellent public safety,” he said.

According to McBride, Progressive planning means programs and personnel in place that are effective crime fighting strategies with real results.

Efficiency means resources properly allocated to meet the needs of our citizens in a manner that not only detects and prosecutes crime, but serves as a deterrent to keep it from happening in the first place.

Accountability means everyone is responsible for their actions, for their successes, and most importantly for their failures from the top down.

McBride said he will put tools in place to reduce police response times.  “We are going to utilize the correct number of personnel to effectively respond to and investigate crimes thoroughly.  “

McBride said he plans to get more deputies out on the streets patrolling neighborhoods and the Sheriff’s administration/command staff will be reduced by half.

McBride said he will build a cooperative relationship with the Solicitors Office to ensure that cases move forward and that there is appropriate justice provided for the victims and an adequate punishment for the criminals.

He said narcotics and other drugs will be a priority. “We need to work street level narcotics and rid our streets of as many drugs as possible.  Most of the crimes today are in some way connected to drugs. We will focus on street level drugs so we can hurt the mid-level and higher-level drug operators.”

He said he plans to modernize the way crimes are investigated.

“We will develop a major case unit that will focus on those 20% of criminals that are committing the 80% of crime.”

“If you are a victim today, you will hear “Call us if you hear anything and here’s your report number”. That is not excellence,” McBride said. “We will be centered around customer service, and we will stand for nothing less. We will investigate your crimes thoroughly because we want to get these criminals before they get the next victim.”

“We need to be progressive, proactive and address the problems that the communities of Anderson County are dealing with,” McBride said, “I want Anderson residents to feel confident we are on their side providing excellence in all aspects of police work and customer service. I will demand that our budget is spent wisely and I will settle for nothing less.” 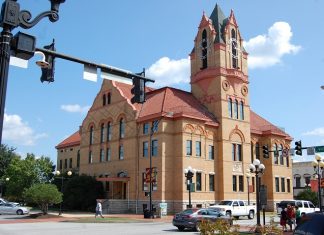