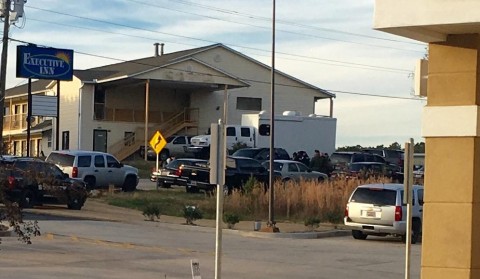 Incident ends in self inflicted deaths of suspect, girlfriend

A three-hour standoff involving a suspect in the murder of a Simpsonville man and the Anderson County SWAT team at the Executive Inn on S.C. 153 last Tuesday night (Nov. 24), ended in the self inflicted death of two people.

According to reports, Kevin Duane Brewer, 37 and Jennifer Lynn Bensch, 32, of Simpsonville, were both found dead from self inflicted gunshot wounds to the chest after a three hour standoff. During the standoff, Brewer fired two shots through the motel room at law enforcement officials at the scene, hitting one SWAT team officer in the helmet.

The SWAT deputy was not injured and at no point did the responding officers exchange gunfire, instead opting to use tear gas to attempt to diffuse the situation. The Anderson County Sheriff’s Office eventually entered the room, after breaking a window, and both occupants were found dead.

Officials with the Anderson County Sheriffs Office said Brewer was a suspect in the shooting death of Donnie Pitts Taylor, 76, of Simpsonville, who was found dead from a single gunshot wound to the chest just after 8 p.m. Monday.

According to reports, Brewer lived in Simpsonville but was from Honea Path. Shore said Bensch was Brewer’s girlfriend. Simpsonville Police Chief Keith Grounsell said during the standoff, Brewer implicated himself in the Taylor, which happened after an argument turned physical.

According to the ACSO, approximately 40 officers responded to the scene in Powdersville along with officers from the Simpsonville Police Department. The investigation into Taylor’s murder is ongoing and the South Carolina Law Enforcement Division is investigating the standoff, officials said.