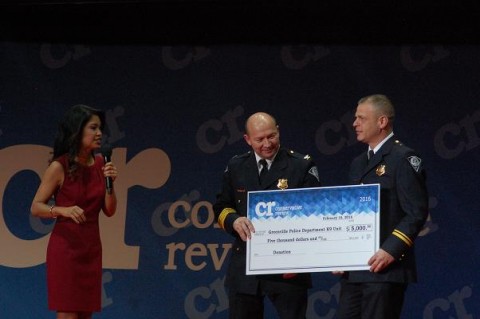 After making campaign and town hall type appearances all over the Upstate over the last two weeks, Republican Presidential Candidates Sen. Ted Cruz and Dr. Ben Carson had the opportunity to speak to conservatives at the Conservative Convention held at the Bon Secour Wellness Arena in Greenville Thursday night.

Sen. Marco Rubio and Rep. Trey Gowdy were scheduled to appear, but did not.

In addition to hearing from two of the fields more conservative candidates, the crowd of approximately 5000, a majority apparently Cruz supporters, heard from nationally known conservatives in both politics and the media.

Prior to speaking, Dr. Carson had a question and answer session with the press. When asked about his position as the presidential field shrinks, Carson responded that he is in the presidential race for the long haul and is using electronic media, prepared videos for people to share and traveling all over to speak to people to boost his campaign.

“The more people I am in front of the more people understand what I stand for,” he said. Relating the campaign to a baseball game, he said “It is early in the game.”

Carson said voters should think seriously about this election. “We (the country) are in a lot of trouble,” he said. “I do believe the American people are smart enough to figure it out.”

The recent passing of Supreme Court Judge Scalia, a conservative, has also made this election even more important.

Carson said Republicans “have “no obligation to act” on a nomination by President Obama, adding that if a liberal judge is appointed it will “tilt the court.”

He said the next judge should be selected by the next president.

“Leave it in the hands of the people and let them decide,” he said.

Carson also weighed in on comments made by the Pope in regards to Donald Trump.

Carson responded “Someone should send the Pope a picture of the wall around the Vatican” and pointed out scripture in the Bible about the walls of Jerusalem.

On the president’s planned trip to Cuba, Carson said he was not happy with it and that the President should wait until there is a regime change, which he said will probably not be long since Ruell Castro is so old.

Sean Hannity also met with the press and weighed in on the Pope’s comments. Hannity said he was raised as a Catholic “and was very disappointed in the Pope.”

Speaking during the event, Libertarian Matt Kibbe said that he was there to talk about drugs. The drug he talked about, socialism, is being pushed by Democrat Presidential candidate Bernie Sanders.

“It is a dangerous thing and has to stop,” he said. “It has killed hundreds of millions of people. The other Democratic candidate said she supports Democratic Socialism. Kibbe said that during a Chris Matthews interview, Hillary Clinton was asked what is the difference between a Democrat and a Socialist. She had no answer, Kibbe said.

Kibbe urged parents and grandparents to talk to their kids. He said to tell them, “Socialism kills, just say no.”

David Brat said there were six things that “make this country great.”

According to Brat they are: Judeo Christian tradition; Rule of Law (including Magna Carta, Constitution, separation of powers and freedom); Equality under the Law; Fiscal Responsibility; The Constitution; a Strong National Defense and Faith in God.

David Limbaugh said the current president is a Marxist and a racist and “has done everything he promised” to fundamentally transform the country.

He said that moderates, democrats and the liberal establishment have infiltrated throughout the government.

He pointed out that Republicans should not emulate Democrats and that the things conservatives stand for have produced the most prosperity for the most people.

He also said the Republican Establishment has purged conservatives from the base. “We need to join together to help make America once again the shining city on the hill,” he said. Sean Hannity said “In November we have the opportunity to change America, and take it back to what it was.”

Hannity said the unemployment numbers issued by the government don’t reflect the 94.5 million who are long term unemployed and have given up trying to find a job. He said there are 46 million on food stamps and 50 million in poverty.

He said President Obama “will leave office with the country in more debt than every president before combined.”

Hannity said his plan to balance the budget is “Don’t spend more than you take in.” He also suggested cutting one cent of every dollar that is built into the governments automatic eight percent increase in spending for eight years would balance the budget.

He also mentioned on controlling the borders, choice in education and fighting Islamic terrorism.

He urged voters “to search your heart” in making a decision for president.

Sen. Mike Lee said conservatives have been “conditioned by politicians who don’t keep their promises, to settle for less than we deserve.”

He urged people to “think about the kind of president we are ready for” and that we need “true conservatives.”

“We don’t have a king. The power belongs to the people. Expect substance and not big deals,” he said. “It is time to unite, expand and expect more.”

Rep. Louie Gohmert said “This country needs a new day” and to get away from government dependency. “God will bless us if we follow the rules,” he said.

Dan Bongino said, “We have reached an inflection point. If you are not ready to stand up now, when this primary is over, we have to go out there to take it back.”

He said the discussion used to be about tax rates and education, but now it is about the flag and what it stands for. “It is about what that flag means, that idea. That is what is in jeopardy right now.

According to Bongino, that story, that flag reflects the narrative of God, family, voluntary association and believing in a higher power.

According to Bongino, Liberals bind together by government force.

He said all religions have a common theme of sacrifice.

“We need to leave nothing on the battlefield in this election,” he said. The country’s future depends on it.”

CR Editor Mark Levin said, “It is time for all conservatives to come home now and do the right thing.”

“It is very important, in every state, we must win them. We cannot leave it to communists and elected politicians in DC, or others to determine our future.”

Candidates Ben Carson and Ted Cruz spoke during the event.