April 22 – S.S. Barnes responded to the Dollar General Store at 602 Anderson St. where Kayla Sutherland reported that while she was inside the store, someone entered her car and stole her purse, containing personal documents and Verizon Equinox tablet, valued at $185 .

April 23 – K.M. Pride responded to 111 Cedar Dr. where Danielle Resnick reported the theft of a Redcat four wheeler and a red Honda RX50 dirt bike. The loss was estimated at $1500.

April 23 – J.K. Vickery was on patrol in the vicinity of the Pilot gas station at 110 Frontage Road, when he encountered a person he knew to be Allen Shane Hall, Sr., WM, 38, 5’11″, 255 pounds, black/blue. Hall began acting strangely and appeared to be secreting an item or items in the waistband of his pants. Vickery conducted a search for weapons and found more than nine grams of methamphetamine. Hall resisted arrest for several minutes before being subdued and taken into custody.

April 25 – S.S. Barnes responded to he BP gas station on Hwy. 86 in Piedmont where Varkey Joseph, owner of the location, reported that someone had broken in and stolen cash from a file cabinet in the office. The amount taken was withheld by the ACSO.

April 24 – J.G. Williams responded to 547 H I Taylor Rd. where he observed a Hispanic male, later identified as Wilver Mejia come outside and lie down on the porch. At that same time, another Hispanic male came out the side door. Humberto Garibo, 25, 5’6″, 165 pounds started yelling that he had assaulted Mejia inside the home. Yahara Torres, who has a child with Garibo, explained that she and Mejia returned from a date to find Garibo waiting for them. A fight ensued. Garibo, who was intoxicated, was arrested for assault and battery in the third degree. 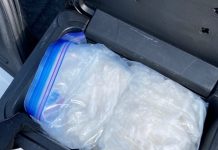