After updating Board members on the School District One building program Tuesday, Superintendent David Havird introduced plans for replacing Palmetto Middle and Wren Middle school buildings, which are two of the oldest in the district. Havird said Palmetto Middle School was constructed in 1953 and Wren Middle School was built in 1951. Both schools were new high schools when they were originally constructed.

Under the proposed plan, construction of two new schools will take place at the current school campuses while present facilities continue to be used. Portions of both structures will be retained, including gyms and auditoriums. Once the new construction is completed, the old parts will be demolished and removed.

Preliminary planning will take place over the next year with a bond referendum possibly in 2019. The building project is expected to take three years to complete.

Havird said both principals had done a great job with increasing maintenance required on the aging buildings.

He said that a vision for the future has to be a high priority and the previous bond referendum of $86 million did not allow enough for new middle schools.

“It is time to start communicating a new vision of what could be possible for Palmetto and Wren Middle,” he said.

Havird and Scott then presented what Havird called “A Vision for the Future of Two Middle Schools Construction.”

Havird said as enrollment growth continues, the building program and projects have become a high priority. He reminded the board of their goal to re-visit future building projects for the middle schools within 10 years of the previous bond referendum.

He said there is now a consensus among all seven board members, that the most appropriate course of action is to consider building two new middle schools.

“It is very important to begin communicating a vision for two new middle schools,” Havird told the board. “We want our parents, patrons, and stakeholders to be looking to the future while focusing on the present. We want to set long-term building goals that will ultimately make the district better for student learning.”

“We built these additions understanding that these classrooms could be used when the decision to consider replacing the remainder of the school would be made,” Havird said.

The Superintendent said there is a possibility, the gym and auditorium at Palmetto Middle could be remodeled, as well as the gym at Wren Middle School.

“Further assessment and evaluation will need to be made on this,” he said.

“We plan to share with you a vision for the future, replacing these aging middle schools, which would include constructing new middle schools on the same site, which also saves money, while school is continuing and phasing this building process in over 24-30 months. “

“This can be a complex and challenging process which requires much planning to minimize disruption on student learning.,” Havird said.

He said there are approximately 750 students attending each of the schools.

“In planning for the future, a new middle school would need to be built for approximately 1,000 students.

Havird said that “building something new in an empty space is not difficult. However, building a replacement in a place that is congested with infrastructure, old buildings, middle school students, especially, when you are having to keep the old building opera ting until the new building is finished, is a lot harder and can be very complicated.”

“Planning ahead and sharing a vision of how this can be done is very important for future growth and to minimize disruption to the academic process,” Havird said.

Powell then presented information on the plan illustrating how the building process could work at Wren Middle and Palmetto Middle while still using the current facilities. 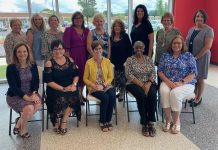