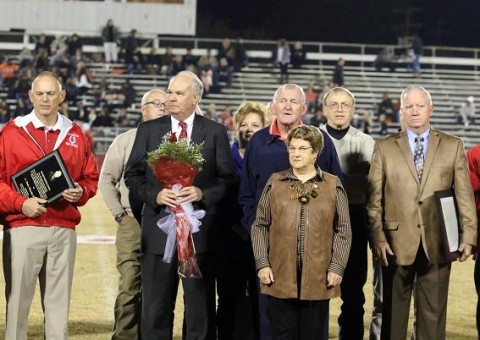 Former Anderson School District One Football Coach and Administrator Dale Martin was recognized during halftime ceremonies of the Palmetto Mustangs vs. Pendleton 3A playoff game Friday (Nov. 18). Martin (center), accompanined by wife Carol and family members, was recognized Friday during the Palmetto High Playoff game. Palmetto High Assistant Principal Mike Kelly (left) Superintendent David Havird (2nd from left) and School Board member Dr. Doug Atkins (right) joined in honoring Martin with a plaque recognizing him “For his years of service to Palmetto High School and the Palmetto Comunity.” A permanent marker will be placed in the area of the north end zone designating the field as the C. Dale Martin Field.

Accompanying Martin were his wife Carol, sons, Barry and Vic and daughters, Stephanie Martin and Miriam Nelson. Grandchildren and great grandchildren were also present along with other family members, special friends and former football players.

Martin coached at Palmetto High School in the late 60s and 70s and was the head football coach at Palmetto when the Mustangs won the State 3A Championship in 1970. He also put a lot of time, energy and effort into the football field at Palmetto.

Martin was inducted into the Palmetto High School Hall of Fame in 1997.

He worked in public education for 34 years and in School District One as a teacher, coach, assistant pricicpal and principal. He also served on the Anderson One School Board from the late 1980s until 2006 and He currently represents the District on the Anderson County Board of Education.

Martin also impacted the entire community through his service with the Town of Williamston, serving for 52 years as a part-time recreation director retiring in 2014.