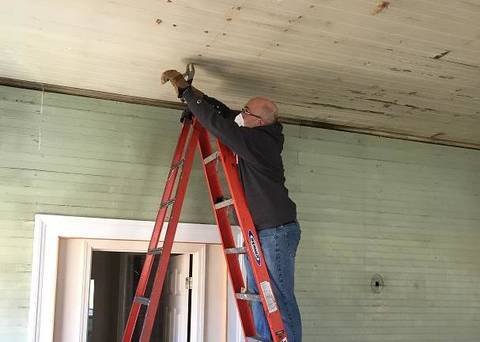 In an effort to save the old Pelzer Hospital building, volunteers held a work day recently to kick off the process of restoring the historic structure.
The cleanup included taking down sheetrock and cleanup, primarily in the front room of the building.

The project is the first for a new non-profit called Restore Pelzer, which was formed to restore and preserve historic structures and spaces in the Town of Pelzer for the benefit of its citizens.
The organization hopes to revive the historic building which was originally built by the mill in 1890 as a Lyceum. After the Pelzer EMS moved to their new building, the old hospital building was basically abandoned for many years and was headed towards demolition.
Restore Pelzer is led by Pelzer Councilman Will Ragland and a board of directors comprised entirely of citizens who live in Pelzer, work in Pelzer, or have direct family ties to Pelzer.
The group has met with Preservation South, a local firm that specializes in restoring historic properties, and will be meeting with others for input in raising funds in order to give the building a second life.
Ragland said the next step is to reach out to major donors through the Restore Pelzer non-profit.
The project is one of several underway to improve Pelzer.
A company from near Atlanta recently begin work removing pallets from the Pelzer Mill property
Anderson County and the Pelzer Heritage Commission worked together to obtain funding for the cleanup and the County also assisted in letting the bids and awarding the contract.
Other cleanup on the properties are planned for this year including work at the old Pelzer dump. That work includes cleanup and establishing a river overlook park.
The Pelzer Hertiage Commission is also in the process of establishing a Historic District that includes properties on Lebby Street, Reed Street, Smyth Street to Anderson, portion of Anderson Street and Square St. The district also includes the dam and power house and some mill structures, the Pelzer Auditorium and hospital building.
The Town of Pelzer has been in the process of deciding what services the new town wants and needs since the annexation in 2015 that more than tripled the size of the town.
Town officials have discussed the cost of having a police department and other services, and establishing a millage rate for a tax base.
The town is also planning a “Charette” to be held Mar. 7-9 to gather input for the Hwy. 8 Master Plan. Pelzer and West Pelzer jointly received a MASC grant for the Hwy. 8 Master Plan project.
The Charette will be held in the Community Building and various people and representatives in the community will be invited to participate in the round table discussions.
The Town has also received a grant to help with a Master Plan for Pelzer.