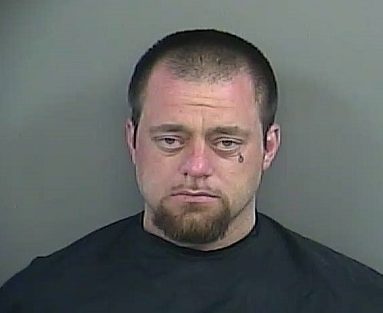 By Stan Welch
A Williamston man, Zachary Earl Powell, is currently in custody at the Anderson County Detention Center on multiple charges, including one  count of murder.
According to the warrant issued for Powell on April 27, he shot a Pelzer woman, Crystal Marie Kuykendall, WF, 39 years old in the face, causing her death. Another woman was in Kuykendall’s truck with her and Powell at the time. She was not harmed, but witnessed the shooting, and went to a house in the area to call for help.
The witness, whose identity has not been released, had joined Powell and  Kuykendall sometime during the day, but did not know Powell. She said that she was seated in the middle of the front seat between  the  two. She said they had been arguing about their destination, and that Powell, having put some gas into the truck, was angry because he wanted to go in a different direction. When he shot the victim, he reached across in front of the witness and pulled the trigger.
The remoteness of the location, at the intersection of Wright’s School Road and Level Land Road, in the Honea Path area, and the time it took the witness to get to a phone probably played a part in Kuykendall’s death, according to Chief Deputy Coroner Charlie Bozeman.
“The bullet remarkably missed all major arteries and organs. The victim actually exsanguinated, or bled to death. If she had received medical care more quickly, she would likely be alive today.”
Bozeman said that the witness reported that the two had been arguing all day long, but at about 2:30 a.m. the argument accelerated, and Powel shot her, and stole the truck.
He was taken into custody later that day, and faces murder charges,  as well as grand larceny and two probation violations. He remains in the Detention Center at this time.