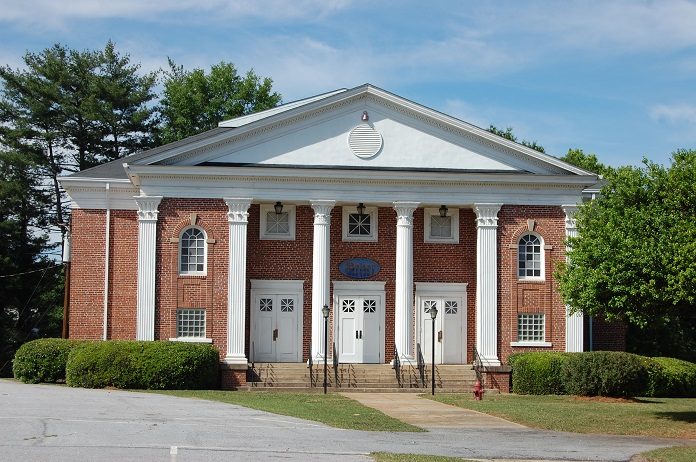 The Historic Pelzer Auditorium will be the site of one of five locations hosting the 19th annual Chautauqua History Alive Festival. The living history performance in Pelzer will feature a nationally acclaimed historical interpreter dressed in costume that will bring President Abraham Lincoln  to life.
The stop in Pelzer is one on the ten-day, two-weekend festival schedule of non-stop live history and fun is for the entire family.
The events include five different shows performed by nationally acclaimed historical interpreters and other events. And it’s all FREE.
The 2017 Festival presents a President, a Poet, a Protester, a Pressman and a book that changed America with performances in Greenville, Spartanburg, Travelers Rest, Fountain Inn, Pelzer SC and Asheville, NC.
The performance in Pelzer will be of Abe Lincoln, by George Frein, of Ft Worth, TX.
Frein, PhD, has long studied the power of words; first, as a Philosophy major in college, next as a theologian, next as a university prof, and finally as a Chautauqua scholar. For Chautauqua he wrote Moby-Dick as Herman Melville; practiced talk therapy as Carl Jung; was an orator for American independence as John Adams; used colorful language to “give’m hell” as Harry Truman. He studied medieval architecture as Henry Adams and wrote ornithology as John James Audubon. As Dr. Seuss, he found just the right word to rhyme with cat. He addressed mortality as film director Orson Welles. Last summer George used Mark Twain’s words to prove: “You can’t trust your eyes if your imagination is out of focus.” Now George will show how Abraham Lincoln’s words continue to give the nation “a new birth of freedom.” George is the founder and Artistic Director of Greenville Chautauqua and started performing in Chautauqua in 1984.
The performance of Abe Lincoln will be at 2 p.m.  Sat., June 24 at the Pelzer Auditorium. The event is free.
For more information contact Caroline McIntyre caroline@greenvillechautauqua.org 864.244.1499 or 864.360.7500