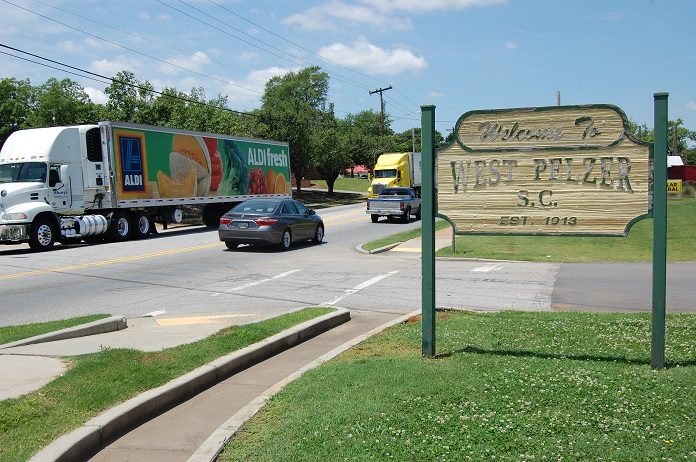 An informal traffic count conducted by an  intern working for the Town of West Pelzer showed that the town averages one hundred tractor trailer units along Main Street (Hwy. 8) each hour. Approximately half of the truck traffic is related to the coal ash removal project at the W. S. Lee Steam plant site which is expected to be completed by the end of the year.
The survey also showed that fifty pedestrians each hour cross the street.  The survey was taken over an eight hour period on a Thursday, traditionally one of the busiest traffic days.
West Pelzer Mayor Blake  Sanders said that those numbers are impressive enough to get the attention of officials with the South Carolina Department of Transportation (SCDOT).
The town has been exploring ways to reduce and slow traffic along the thoroughfare.
Mayor Sanders said that the numbers, accumulated during an eight hour period on a Thursday, influenced DOT’s decision to approve street parking along Main Street, as well as the possibility of installing a three way traffic signal at the intersection of Highway 8 and Palmetto School Road later this summer.