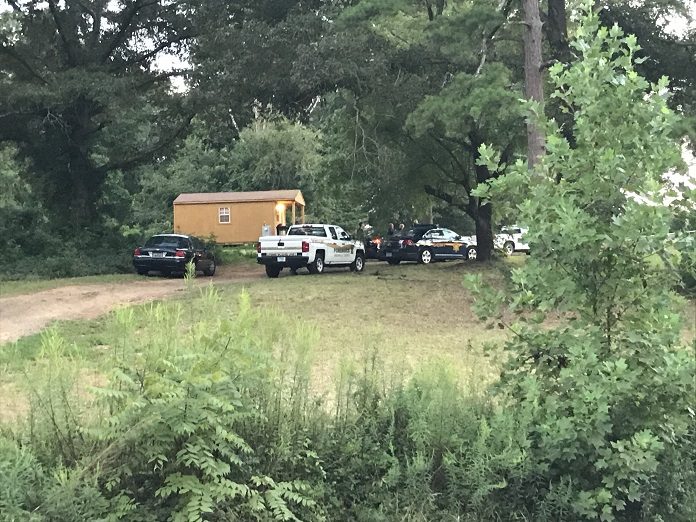 Greenville County Deputies along with the Greenville County Coroners Office work at the scene of a death investigation Monday evening in Pelzer. Greenville County Deputies responded to Hamby Street near the Anderson county line for an assault. One person was rushed to Greenville Memorial Hospital by EMS where he was pronounced dead. The deceased was identified as forty-eight year old Barry Clayton Eaton of Hamby Street. The investigation continues and one person was taken into custody.
According to reports, at approximately 6 pm Monday, deputies from the Greenville County Sheriff’s Office responded to 240 Hamby Street in Pelzer, in regards to a fight in progress. When deputies arrived on scene they learned than an altercation ensued between two adult-male family members which led to the victim suffering significant blunt force trauma. The victim was transported to the hospital where he succumbed to his injuries and was pronounced deceased.
Investigators from the Greenville County Sheriff’s Office Violent Crimes Unit arrested and charged 23 year-old, Edward Allen Scroggs Tuesday in connection with the death of Eaton. Investigators initiated an investigation and learned that just prior to Eaton’s death an altercation occurred between the Scroggs and the victim, who is his step-father. During the altercation, Scroggs struck the victim at least one time with a blunt force object.
Scroggs has been charged with Murder and is currently in the Greenville County Detention