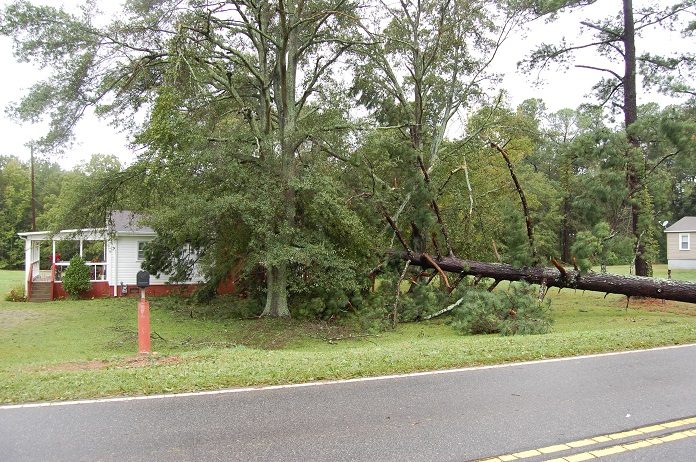 By Stan Welch
As almost two hundred thousand citizens rode out the effects of hurricane Irma’s remnants, Anderson  County’s emergency response infrastructure and first responders “ran their wheels off”, responding to more than seventeen hundred calls between noon  and 11 pm on Monday.
Former Williamston Police Chief David Baker, facing his first major event as the county director of emergency management, said that the cooperation of the many players in the emergency management structure resulted in a textbook response. “I am sure that our debriefing and review of the event will show us areas for improvement, but the cooperation and communication between all the various agencies, both government and private, was phenomenal. Granted, the storm could have been much worse, but our response went about as well as I could have hoped.”

County Administrator Rusty Burns, who also spent the night at the EOC (Emergency Operations Center), agreed with Baker’s assessment. “The operations really did run like a well oiled machine. Director Baker and his staff were well prepared and used the resources needed to manage the emergency. That is the name of the game, after all.”
Baker, who has only two full time staff in the emergency management office, said that the shelter, located at the convention center was expected to close late Tuesday or perhaps Wednesday, depending on how the restoration of power proceeded. “This morning, we had about thirty two thousand people without power. That number is down by about eight thousand now,” he said, speaking to The Journal shortly after one o’clock Tuesday afternoon.
Baker, while praising staff planner James McAdams and administrative assistant Casey Collins, also stressed that once the emergency plan was activated, he had access to personnel from both county fire and law enforcement, as well as municipal departments too. “We had fire departments, municipal police forces, charitable organizations, and just tons of folks who brought significant capabilities to the table. We activated those groups and resources that we felt were needed for this situation, and they really stepped up, from the Red Cross to the municipalities and rescue squads across the county.”
Baker’s opinion was verified by the reports from local police and fire departments in The Journal’s readership area. West Pelzer postponed its regular Council meeting Monday night, in anticipation of the storm’s arrival. West Pelzer Police Chief Chris Brewer reported that a tree across the roadway was the main problem. Baker reported more than five hundred trees down countywide. West Pelzer Fire Chief David Huff said his department ran their wheels off, responding to eleven different calls related to down trees and/or power lines.
“We cut the trees out of the road, so that our trucks, law enforcement and medical responders would have easy access. We had a full crew who stayed at the firehouse. We finally shut down at three thirty in the morning Tuesday, and started up again three hours later. Our guys did a real good job and worked their tails off.”
One man was briefly trapped in his car at the BiLo, when a tree fell on it with him inside. “We didn’t have to do any substantial extraction. We basically just helped him get out of the vehicle. He didn’t have any significant injuries.
The Williamston Fire Department and Williamston Street Department responded to more than a dozen weather related calls for service, primarily fallen trees.
Most of the downed trees missed structures though several did hit houses causing some damage.
Williamston Police Chief Tony Taylor reported that his department spent a fairly quiet night, assisting fire and medical responders. “Outside the fact that we had a pretty healthy storm in town, things went well. We had no personnel injured, and no residents, either, to the best of my knowledge.” Chiefs Brewer and Huff also confirmed the lack of injury to any of their personnel as well.