Williamston Police Officers investigated the following incidents:
Sept. 8 – Stacy Andrea Mosley, 310 E. Carolina St., Williamston reported a brown Roadmaster bicycle stolen from 4 W. Main St. The bike, valued at $100, was next to a dumpster at the location when it was taken. M. Beeman investigated.
Sept. 9 – Michael Anthony Wardlaw, 31, 12 Windfield Hill Blvd., Williamston was arrested for posssession of methamphetamine and drug paraphernalia after officers were notified of a suspicious white vehicle with a white male driver behind the Williamston Park Apartments. T. L. Eichelberger investigated.
Sept. 12 – Fast Fuel, 207 W. Main St,. Williamston reported a shoplifting incident in which an unknown black male entered the store and appeared to trip over a mop bucket that was in the floor.
While the clerk was assisting the man, a female accompanying the man appeared to trip over the same bucked, spilling water on the floor. As the clerk was dealing with the incident, the male went behind the counter and took three cartons of Marlboro cigarettes valued at $44.74 and five cartons of Winston valued at $44.74.
The cartons were concealed under the man’s pants. Both got into a white Kia registered to a rental company in Columbia. L. Buell investigated.
Sept. 19 – John Bennett Reeves III, 26, 106 S Circle Dr., Piedmont was arrested for public disorderly conduct and resisting, interfering with officers after officers responded to 27 McClellion St. in reference to a possible domestic disturbance. According to reports, upon arrival, a white male later identified as Reeves, took off runing away from officers. Officer Haigler and Creel pursued and caught Reeves. During the investigation it was determined Reeves had bit one subject and attempted to bite another. He also stood in the street in a fighting stance posing with an unknown object. All persons on the scene refused to press charges. Reeves was arrested on the above charges and transported to ACDC. B. K. Creel investigated.
Sept. 12 – A 65 year old Belton woman reported that while she was shopping in at 28 Beaverdam Rd., in Williamston, a black male came up to her and exposed himself. The male subject walked out of the store and left in an unknown direction. R. Drennon investigated.
Sept. 14 – Fast Fuel, 207 W. Main St., Williamston reported a counterfeit $20 bill passed at the store by a tall, heavy build male. The incident remains under investigation. K. Anthony investigated.
Sept. 15 – Shaun David Bell, 37, 412 Old River Rd., Pelzer was arrested for possession of methamphetamine after officers were contacted and told that he was in possession of drugs while staying at 109 G St., in Williamston. After receiving consent to search the residence, officers found Bell in a bedroom. A red New Port cigarette box was found containing a clear bag with approximately .8 grams of a white crystal substance field tested positive as methamphetamine.  Bell was arrested and transported to ACDC. R. Drennon, L. Buell investigated.
Sept. 15 – Valarie Elaine Barnett, 22, 110 Gossett Dr. #C-2 reported an unknown person attempted to pry open the front door of her residence Damage was estimated at $50. L. Buell investigated.
Sept. 16 – Officers observed a white Pontiac pull into the West Main parking lot after hours. According to reports, the 19 year old female driver did not have a drivers license and a male passenger did not speak English and had no ID. After being advised that she was not legally allowed to operate a vehicle without a valid driver’s license, officers requested the vehicle be towed. The female driver contacted a friend who picked her up along with the male and an infant that were in the vehicle. R. Maxwell investigated.
Sept. 16 – Joshua Glenn Bullard, 31, 801 SW Washington St., Gainesville, Ga. and Amanda Gail Wilson,, 27, 108 L St #C Williamston were arrested  for trespassing after officers were advised that a male and a female were inside a residence at 3 E First St., in Williamston that had no power, water or windows. The property was under renovation. Bullard was also arrested for an outstanding warrant with Williamston PD for assault. L. Buell investigated. 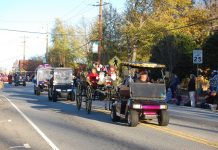