By David Meade
During a meeting Tuesday, lasting less than an hour, Pelzer Town Council heard comments from several citizens.
Mike Matthews asked council not to take any major votes until after the election, when there may be different people on council. He also requested residents sign up to ask particular questions at the next workshop/candidate forum and that it be limited only to people who vote and live in Pelzer.
Sandy Jeanes asked about two interns working for the Towns of Pelzer and West Pelzer and who pays them.
Pelzer Town Clerk Shane Black responded that one assists West Pelzer Town Clerk Paula Payton and the other assists him. He said West Pelzer pays one and the Palmetto Youth Association pays the other.
There was a question about annexing into Greenville County.
Mayor Steve McGregor responded that there have been some concerns by residents about annexing into other towns and that residents should be “at ease” about any annexation because there was not going to be any.
There were comments about lights at the gym, in the park and two street lights on Hampton Street, not working.
One resident asked if there would be vote by the public on whether the town should go with Anderson County or West Pelzer Police for police protection by the town. There was also a question about an extra $3 fee charged when town utilities are paid by phone.
Jimmy Harrison asked about the cost of studying taxation, a fee to bury ash remains in the Pinelawn cemetery and said that the town should focus on problems that need to be addressed rather than the “dreams” a lot of people have. He also complained about the Pelzer Mill property and said that cleanup was the responsibility of the Pelzer Heritage Commission.
During the public works reports, Black reported that the Public Works Department had 22 work orders for Pelzer and that work orders can be submitted online at www.westpelzer.com. Citizens can speak with a public works employee by calling Town Hall at 947-6231 and choosing option #6.
Black reported that all of the electronic read water meters have been installed.
He also said that all town business for Pelzer and West Pelzer is now being conducted at the new Municipal Center at 30 Main Street in West Pelzer.
Phone numbers have not changed he said, however some of the prompts may have.
Customers can continue to use the drop boxes at 3 Hindman St. in West Pelzer and at 103 Courtney St. in Pelzer. Black said they are both checked daily.
Mail deliveries for both towns are being forwarded to 30 Main St. he said.
There was one issue of drainage in a backyard ditch off of Adger Street. The ditch was bush hogged and roughly formed so water could drain. Testing showed there was no signs of sewage.
Black also reported on insurance for town buildings.
According to Black, the town has tort liability coverage that covers all buildings including two buildings that have no insurance for the building or contents.
After some discussion it was decided to provide insurance on the two buildings as follows:
The Marchant building on Courtney will be insured the same as the Town Office building and the Rescue Squad building will be insured the same as the Pelzer Community building.
During council comments, councilmember Kim Wilson reminded residents of the Pumpkinpalooza event in West Pelzer on Oct. 28 which will be followed by a community kickball game on the Pelzer ballfields at 8:30pm.
The next meeting of Pelzer Town Council will be the workshop meeting on Tues. Oct. 24 which will be a candidate forum. 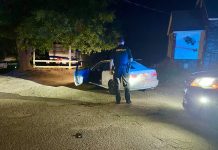