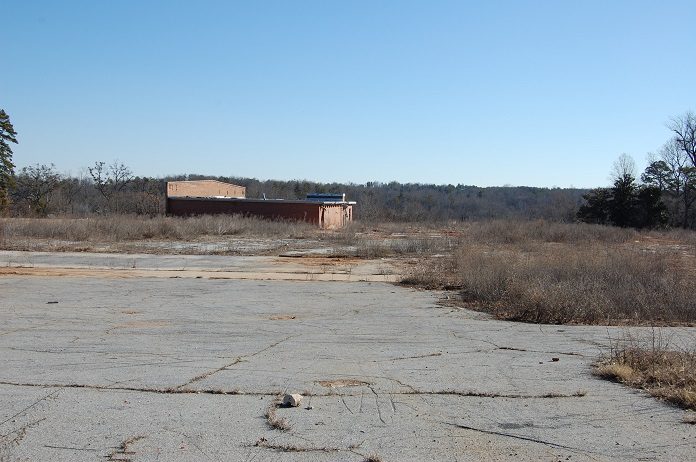 By David Meade
During a public meeting last Thursday (Nov. 9) at the Pelzer Community Building, Gail Rawls Jeter of Cardno, Inc. provided information about the Brownfields Cleanup Grant Application being submitted by Pelzer Heritage Commission (PHC) to the United States Environmental Protection Agency (EPA) for additional cleanup activities at the Upper Mill Site in Pelzer.
The grant amount being requested for the 13.44 acre site is a total of $200,000.
At the beginning of the meeting, PHC attorney West Cox said an agreement had been made with State Investors LLC to redevelop three potential sites on the property and that the grant was a “key component” for cleanup of environmental issues.
State Investors Project Manager Richard Greer provided some information on the first phase of planned development which he said includes two or three commercial and light industrial facilities.
Additional future development is expected to include residential parcels, administrative and research property and a river front trail and park.
Greer said the first phase is designed to bring jobs to Pelzer and the facility will be located at the old #4 Mill site. He said there will be some trucks bringing materials to the textile related business but it will not need the railroad access.
He said they are also looking at two other sites for 50,000 to 75,000 square foot buildings.
Greer said the entrance will be designed to fit in with the area and “is going to remind people of the old #4 mill.”
Greer pointed out that the twin towers on the mill “were iconic” and the history of the mill, and it being fully electric, is also important.
“We are committed to this thing, because we are committed to this community,” he said.
Greer said in promoting the project, State Investors didn’t mention Greenville and he bragged on the area including the school system and that people want to work.
During her presentation on the grant application, Jeter Jeter recapped grants that have been obtained to help with cleanup of the Pelzer Mills Properties and said a lot of work has gone into the property since 2008.
“I am so excited about the potential. The Pelzer Heritage Commisssion has been so instrumental in getting a lot of this work done,” Jeter said.
In 2010 the Town of Pelzer receive d $200,000 assessment grant which began the cleanup process by identifying potential problem areas.
The Pelzer Heritage Commission acquired ownership of the property in 2013.
A $400,000 grant was awarded in 2016 to cap the old mill dump site.
In 2017 PHC received a $250,000 loan and a $48,000 grant from the DHEC revolving loan fund for work at the lower mill site. Anderson County has committed to pay back the loan as well as providing $50,000 for pallet removal at the lower mill site.
“Anderson County has shown a tremendous amount of support,” Jeter said.
Jeter explained the cost of the two foot cap being required by DHEC for the dump site was going to be more than the $400,000 grant. Jeter said PHC officials recently went to Columbia to see if DHEC would revise the cap to one foot or if DHEC could help with a grant from the revolving loan fund for the additioanl cost of the two foot cap.
Jeter said DHEC officials agreed to grant the funding necessary to complete the capping of the mill dump site.
The current grant application is for $200,000 which will be used for community involvement, cleanup planning and actual cleanup, Jeter said.
Jeter said there were two options for additional cleanup of the upper mill property, including excavation and removal of two feet of soil or capping areas not covered by buildings or parking.
The plan, which is included in the draft ABCA, calls for the capping option which is estimated to cost $467,625. If approved, the grant will cover $200,000 and has a required match amounting to $40,000, Jeter said.
According to Jeter, State Investors has guaranteed the additional $267,625 needed to complete the cleanup project.
The cap will consist of a geotextile membrane with six inches of clay soil and six inches of topsoil. A stormwater retention pond will cap a portion of the property by encapsulating contaminated soil.
The capping plan also includes a number of tree wells which will allow trees to be placed around the industrial site making it more attractive, Jeter said.
Several residents commented on the work being done by PHC and the brownfields cleanup of the property.
Sandra Jones said, “I am very excited about the things coming to Pelzer.” She asked what residents could do to help with the project.
Jeter responded that showing community support at meetings is the main thing Pelzer residents can do.
Several other residents spoke including mayor-elect Roger Scott who said “I am very excited for the people of Pelzer.” He thanked the PHC members and said he wanted to move forrward. “Jobs for our folks is really what I want to see.”
PHC Representative Larry Coker said he wanted to see Pelzer move forward and that he is looking forward to getting the Master Plan for Pelzer completed to tie in with the development of mills property. “We have to work together,” he said.
Interested citizens who would like to show support for the project can provide comments.
The draft ABCA will be available for public comment ending Monday, December 11.
The grant application is being submitted on November 16.
The related documents are available at the West Pelzer Municipal Center at 30 Main Street.
For additional information or comments about the grant application and/or draft ABCA, contact one of the following:
Dianne Lollis Pelzer Heritage Commission (864) 847-5743 – Phone & Fax or email at missetta@charter.net
Larry Coker Pelzer Heritage Commission (864) 243- 9120 or email lcoker8@att.net
Gail Rawls Jeter Cardno, Inc 1812 Lincoln Street, Suite 301 Columbia, South Carolina 29201/ Email Gail.Jeter@Cardno.com, phone (803) 929-6059 or fax (803) 851-1328.