The West Pelzer and Pelzer Christmas Parade will be held at 3pm on Saturday, December 2nd. The parade will begin at the West Pelzer Fire Department and proceed down Main Street (Hwy. 8) through West Pelzer and onto Lebby Street in Pelzer and to the Saluda River. Awards will be given for the overall best float, as well as the religious and school categories. Following the parade, cookies, coffee and hot chocolate will be served at Chapman Park. 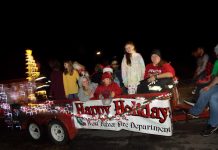