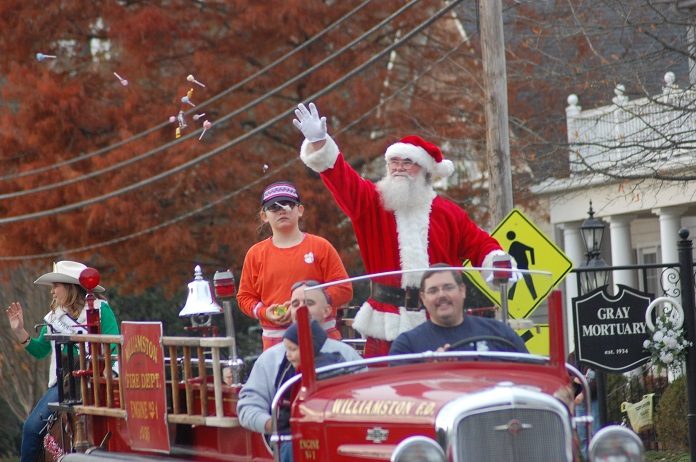 Santa made his first parade appearance in the area at the West Pelzer and Pelzer Christmas Parade Saturday. The Williamston and Piedmont parades will be held this Saturday as well as the Santa Express coming to town.
The Williamston Christmas Parade will be held Saturday, December 9 at 3 p.m. The theme will be “Keep Christ in Christmas”.
The parade will begin at the traffic light at Hamilton St. and Greenville Dr. and will end at Calvary Baptist Church. There is no fee to enter the annual parade, but all entrants are encouraged to bring plenty of candy.
Sherrie Cole is the parade organizer. Registration will be held in advance by submitting an entry form to the Town of Williamston at PO Box 70, by FAX to 864-847-5910 or email to sherricole@charter.net.
Registration will also be held day of parade at the line up which will be held at Fort Hill Gas offices at 701 N. Hamilton St. at 2:15 p.m. and ending at 2:50 p.m.
Registration forms are available at the Williamston Municipal Center or participants can call Town Hall at 847-7473 or Cole at 864-847-5501 or 864-353-2893 for information or registration.

The Piedmont Christmas Parade will take place on Saturday, December 9th, at 11 am. The parade begins at the Save-A-Lot center on Hwy. 86, crosses the Saluda River Bridge and ends at the intersection at the top of the hill.
Interested participants should contact Kathy Hand, Chairman, 864-607-2702, Paige Crawford, 864-567-5390, or Maxie Freeman, 864-569-4364.
Entry forms can be obtained at the Piedmont Fire Department. Entry fee is $15 for individuals and $30 for clubs. The deadline for entry is December 1st. Late fees are $20 and $40.

The Greenville & Western Railway Company Santa Express – The Greenville & Western Railway Company, LLC, will celebrate their tenth year of bringing Santa to the area on Saturday, Dec. 9 with the “Santa Express”.
The Santa Express will have stops in Belton, Cheddar, Williamston and Pelzer.
At each stop children can step on board Santa’s caboose and tell him exactly what they want for Christmas. They will receive a sweet treat and Santa will draw tickets at every stop for special gifts from his gift bag.
The Santa Express schedule is as follows:
Belton – arrive O’Neal Street 10:45 a.m., depart 12:15 p.m.
Cheddar – Cheddar Road arrive 1:30 p.m., depart 2:45 p.m.
Williamston – Williams Street arrive 3:15 p.m., depart 4:15 p.m.
Pelzer – Lyman Street (at the depot) arrive 4:45 p.m., depart 7:15 p.m.
Santa will stay until the last person has a chance to come through the caboose at Pelzer, G&W Railway officials said.
The Greenville & Western Railway is also partnering with the Belton Interfaith Ministerial Association (“BIMA”) and the Presbyterian Food Bank of Pelzer and Williamston (“PFB”) to collect food for those in our community who may find themselves in a time of real need.
Greenville & Western encourages the community to bring a donation of one or more non-perishable food items to the train on Dec. 9.
Greenville & Western, BIMA and PFB volunteers will be staffing Aiken Railway caboose (the caboose directly behind the locomotives) to accept donations.