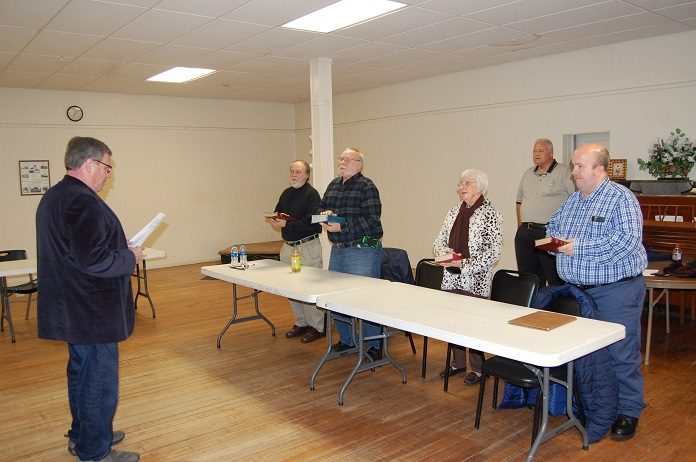 The Town of Pelzer officially has a new Town Council and Mayor. New council members Eddie Waits, Gary Pridmore and Michael Matthews, along with re-elected member Olene Bear were officially sworn in to their offices during a special meeting Tuesday night. Outgoing mayor Steve McGregor administered the oath of office. Roger Scott Sr., joined by his wife Karen, was also sworn in as Mayor by McGregor.
Following the ceremony, Scott thanked everyone for their support and expressed enthusiasm for the new council and the Town of Pelzer.
“We have a good team,” he said.
Councilman Waits thanked the citizens and stated he was excited about serving them and that the council is there for the right reasons.
Pridmore reiterated that “the whole town needs to work together.” He added that the people elected them and they know that. He said they will also “work with other groups, but will not be dictated to.”
Bear thanked everyone who worked so hard to get them elected and said they will work for the town of Pelzer. She said they have a good team and will make good changes. She added that they know they can’t please everyone but will need some help. “We will work together to see some changes,” she said.
Matthews said, “Everyone matters, no matter what you have, we want to hear it. We are here for you.”
Scott said, “Everyone matters” and for the new council, “Pelzer comes first.”
Scott said the first regular meeting of the new year will be held on Tuesday, January 16 at 7 p.m.
After that the council will return to their regular meeting time and date on the second Tuesday of each month