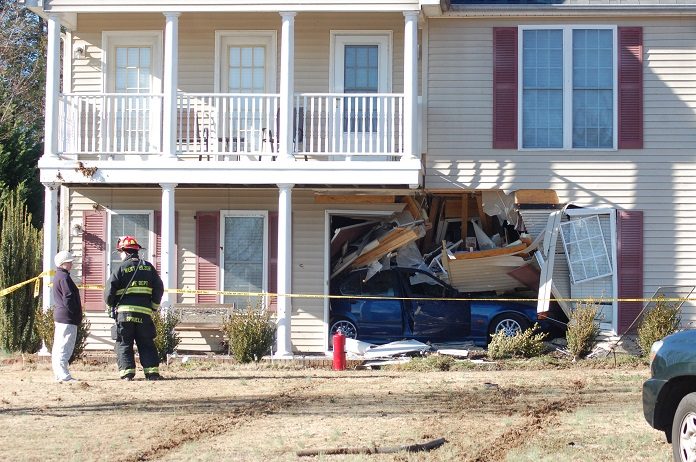 Anderson County Sheriff’s Deputies and SC Highway Patrol investigated at scene of a wreck on Looper Road in which a vehicle, apparently traveling at a high rate of speed, left the roadway on a sharp curve, skidded across a yard, a road, another front yard and crashed into a house on Maxton Way, ending up inside the house.

The car was being pursued by an Anderson County Sheriff’s Office deputy in a chase that began about two miles away on Effie Drive near Piedmont shortly after 9 a.m. Monday morning. According to reports, the sheriff’s deputy attempted to stop a car and the car’s driver failed to pull over.

One person was in the living room when the car hit the house and was unhurt. Two people in the car were apprehended by Sheriff’s  Deputies after they tried to run from the scene. One man was taken from a sheriff’s patrol vehicle to an ambulance and was transported. Sharp curve on Looper Road where vehicle left the roadway.