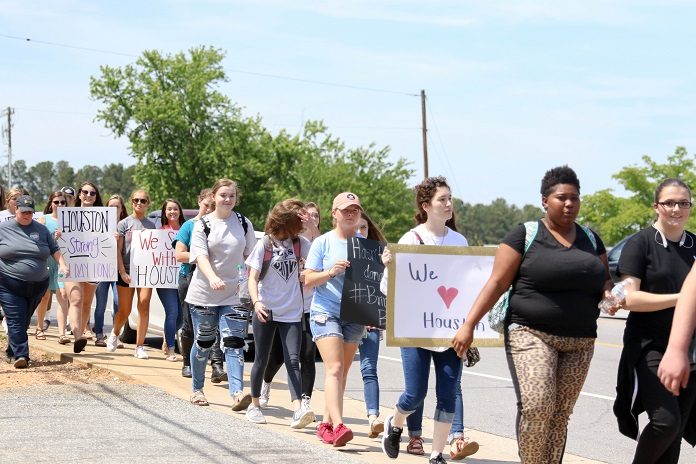 The actions of a veteran and respected teacher at Palmetto High School have sent shock waves through the Williamston community, as well as the educational infrastructure in Anderson One School District.

Lisa Houston, a veteran of twenty years of teaching, who had a flawless record until her actions this week, either retired voluntarily after a video of her classroom behavior was shown by “WYFF-TV4, or she was forced to retire by the district’s administration, depending on who you talk to.

The video shows Houston standing on the desk of a student who has fallen asleep. She has her foot on his chest at one point, as well as her hands. She is also seen tugging at his hair and lightly tapping his face.

Houston has conceded that the video, which was broadcast without sound, “looks bad.” But she insists that it was a kind hearted effort to wake the student, who is black, and get him to pay attention. She says that she and the student in question have a great rapport, and that the whole class knew she was joking around.

Julian Johnson, father of the student involved, has stated that neither he nor his son had asked for Houston to retire or resign. “I just wish it would go away” said Johnson.

Nevertheless, once the video was aired, the district office took action. In a statement released by Jane Harrison, assistant superintendent, the District states, “The individual (Houston) has already separated as an Anderson One teacher. Although the District is unable to comment in detail about the matter, the administration took seriously what occurred and the teacher, who has had an exemplary record of teaching performance, decided of her own accord that she would retire in the best interest of her school.” (Italics added for emphasis)

Ryan Beasley, Houston’s attorney, released a statement reiterating that, “My client has a 27 year unblemished record teaching in the public schools. Over the years, she has earned the love and respect of her students, her peers and the community. She is devastated over what has occurred.”

Beasley also stated that “This short clip, lacking any audio, does not tell the whole story. There were many witnesses in the classroom and to the playful nature of her relationship wither students. We are confident that as more facts come to light, her reputation as an excellent and loving teacher will be restored.”

According to reports Houston told the TV news station “If you ask any kid I’ve taught, they will tell you I kid around with them, I make them stay awake and laugh with them. I know the video looks bad. If you don’t know the situation, you don’t know what is going on, but it was not a malicious act. It was all in fun. I want the public to know that I love that student, and that our rapport with each other was great. I would never have done anything to hurt him.”

Thursday afternoon more than one hundred students marched from the high school to the administration offices in a show of support for Houston. Another show of support came when Doug Atkins, a former principal at Palmetto High who actually hired Houston twenty seven years ago, resigned his position on the Anderson School District One School Board. According to reports, Atkins, resigned from the board Wednesday night because he was unhappy that Houston had been forced to retire, and refusing to be a part of such action.