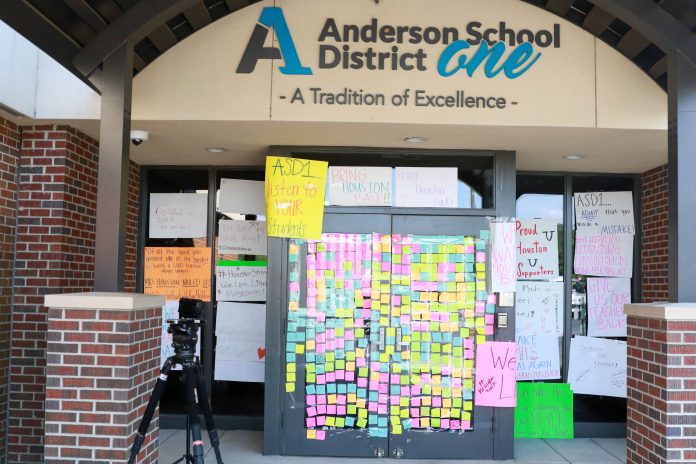 By David Meade
The Anderson School District One Board of Trustees have scheduled a special called meeting tonight, (May 9) at 6 p.m. to hear comments from the public and receive legal advice regarding an incident at Palmetto High School last week which resulted in the resignation of highly regarded math teacher Lisa Houston.
The meeting was moved from the District One office on Hamilton Street to the Palmetto High Auditorium to accommodate what was expected to be a large crowd.
There are conflicting reports of whether Houston voluntarily retired or was pressured to resign over the incident.
When contacted this week for some clarification, School District officials said they were not able to comment on the incident.
On Monday, the School District One Board announced a special called meeting that was originally to be held at the District Office, but was moved to Palmetto High.
School District One Board Chair Nancy Upton did talk with The Journal late Tuesday evening.
Upton said she could not comment on the teacher incident because it is a personnel issue, but she felt the need to have a called meeting of the Board to let the community express feelings about the situation.
She also made the decision to move the meeting from the District Office to Palmetto High School because of the interest by the community.
Upton said there is a process the District goes by when a teacher is hired, transferred or resigns where the Superintendent makes a recommendation to the Board pending Board approval.
Upton said the Board members will hear comments from citizens for a limited amount of time and then will go into executive session to hear legal advice.
Upton said after hearing the legal presentation and returning to open session she doesn’t know what will happen.
The Board could take action, have discussion or not.

Upton said, “Sometimes as a community we forget who is the affected party of this. In this district the first concern is the children.”
Concerning the actions of the teacher, The Journal has been told by several Anderson County teachers that they have attended a training seminar in which the keynote speaker addressed ways to get the attention of students.
One of the ways recommended, is standing on a desk.
The training for the teachers was paid for by the district, we were told.
Upton said she had heard of the seminar but was not very familiar with it.
Upton also addressed another issue. She said she had contacted two board members who were rumored to be joining board member Doug Atkins in resigning, and said she was told by each of them that it was not true.
Several gatherings have been held in support of Houston since it was announced she resigned her position at Palmetto High School following the airing of a video last week showing Houston standing on a desk attempting to wake up a student.
Protesters, marchers and speakers, including students, former students and others, have gathered in support of Houston and to express their displeasure with how the situation was handled.
The incident occurred on April 25 and on May 1 a copy of the video, taken by another student in the class, was given to the School Resource Officer at Palmetto High.
According to the incident report, Principal Robbie Roach contacted SRO Jeremy Sargent about the incident. Sargent stated he was advised that the administrative team for the District had spoken with the father, mother and student, none of which felt like there was any abusive or ill motives.
According to the report, Sargent contacted the student on Wednesday morning and the student told him “that the teacher was “playing” around with him trying to get him to wake up. The student stressed that the teacher wasn’t angry, nor was she trying to hurt him. Later that day, Sargent met with the father, to obtain a statement. He also stated that he felt like the incident was done in humor and not meant for ill intent.
On Wednesday, May 2, a local TV news station aired an edited version of the video along with a report.
Ryan Beasley, Houston’s attorney, released a statement reiterating that, “My client has a 27 year unblemished record teaching in the public schools. Over the years, she has earned the love and respect of her students, her peers and the community. She is devastated over what has occurred.”
Beasley also stated that “This short clip, lacking any audio, does not tell the whole story. There were many witnesses in the classroom and to the playful nature of her relationship wither students. We are confident that as more facts come to light, her reputation as an excellent and loving teacher will be restored.”
According to reports Houston told the TV news station “If you ask any kid I’ve taught, they will tell you I kid around with them, I make them stay awake and laugh with them. I know the video looks bad. If you don’t know the situation, you don’t know what is going on, but it was not a malicious act. It was all in fun. I want the public to know that I love that student, and that our rapport with each other was great. I would never have done anything to hurt him.”
Anderson School District One officials released a statement to the TV station that aired the video, which said, “The district wishes our community to know that the school administration immediately conducted an inquiry into what occurred. The individual has already separated as an Anderson One teacher. Although the district is unable to comment in detail about the matter, the administration took seriously what occurred, and the teacher, who has had an exemplary record of teaching performance, decided of her own accord that she would retire in the best interest of her school.”
There were conflicting reports of whether Houston voluntarily retired or was pressured to resign over the incident.
Doug Atkins, a former principal at Palmetto High who hired Houston twenty seven years ago, resigned his position on the Anderson School District One School Board.
Atkins resigned from the board Wednesday night because he was unhappy that Houston had been forced to retire, and refusing to be a part of such action.
On Thursday afternoon more than one hundred students marched from the high school to the administration offices in a show of support for Houston. Several former students spoke in support of Houston.
Gatherings were held Friday and again Monday afternoon in front of the District One office.
Monday, the Williamston Police Department was present as students and some adults, placed post-it notes and posters of support on the front windows and doors of the District One office which also had “Do Not Cross” police tap placed across them.
On Tuesday, approximately 20 people, mostly adults, met in the District Office parking lot to talk about the situation and to decide on speakers for the Board meeting on Wednesday.
According to the agenda, there will be a public comment period limited to fifteen minutes. Only five individuals will be allowed to speak for up to three minutes each.
The District One Board announced that the special called meeting was “to receive legal advice regarding an employment matter and a student matter.” The legal advice will be received behind closed doors in Executive Session.
A report on the meeting will be posted online at www.thejournalonline.com