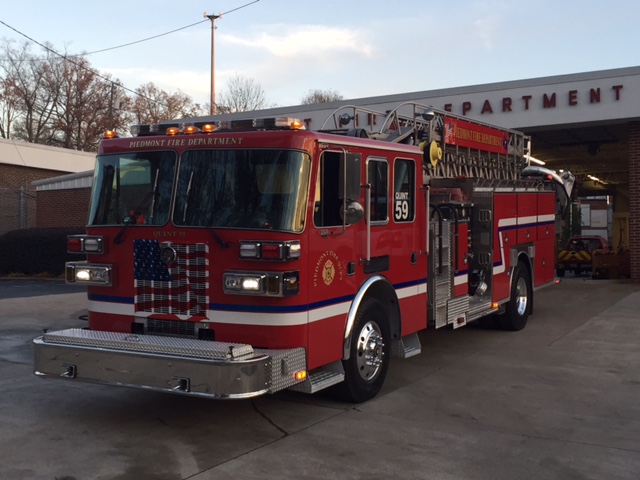 By Stan Welch
The so called “next Travelers Rest”, otherwise known as the Saluda River Grill and Piedmont footbridge area, will inevitably face some obstacles and create some challenges as it moves from the design stage to the finished project. But according to Piedmont Fire Chief Tracy Wallace, adequate fire protection services won’t be on that list.
When the project, which will include significant renovations and improvements to the one time mercantile building, was announced last week, Wallace said his main thoughts were that growth for Piedmont is a great prospect, and that he was proud his department and the public service commission had enough foresight to purchase a ladder truck last year.
“It is a good feeling to see such a potentially major change in our community and know that we are prepared to provide the needed services as a fire department. We absolutely have the apparatus and equipment, as well as the training, to serve this community,” said Wallace.
The area slated for development centers around the dam, which still generates electricity, which is sold by Enel, an energy company, and the century old footbridge that sits atop the dam. The mercantile building, which comprises some twenty five thousand square feet, will be refurbished and divided into stores and retail sites according to Greenville developer Larry Webb, a member of the group that is prepared to invest two million dollars in the project.
In addition to residential and retail opportunities, a strong natural component is in the plans, with walking trails, a park and a permanent kayak dock on the table. Such an approach plays smoothly into an increasing emphasis on water recreation and the Saluda River blueway corridor, which Anderson county is promoting.
Some of the obstacles and challenges include finding seventy thousand dollars for an engineering study to determine how the footbridge can best be salvaged, as well as bringing the existing buildings back into compliance with current building code. Even there, however, there is a silver lining. Chief Wallace stated that all the buildings he has seen mentioned as part of the project are already equipped with sprinkler systems.

A small group of officials and others involved in re-development in Piedmont met last week (See related story).
Among them were Lynn Ballard (Greenville County Council), Ken Waters (Anderson County Council), Larry Webb (KDS Properties), Kyle Dillard (lawyer and concerned citizen), and Anne Peden (Greenville County Historic Preservation Commission and Piedmont Historical Preservation Society).
Another meeting of an expanded group will be held next week. Included in the upcoming meeting will be Rusty Burns (Anderson County Administrator), Joe Kernell (Greenville County Administrator), Matt Schell (Anderson Recreation), Ty Houck and Don Shuman (Greenville Recreation).
A public meeting has been scheduled by the developers in June to be held in the Piedmont Community building. The time has yet to be announced, but a presentation will be made on the plans.
Fire protection not a problem for development In Piedmont