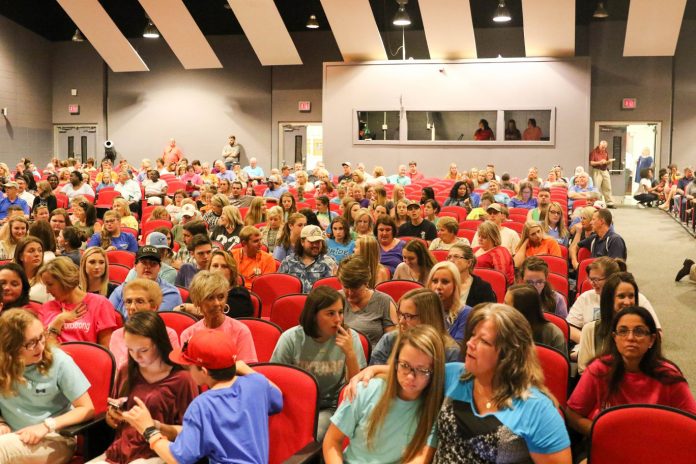 By David Meade
It wasn’t what most in the audience wanted to hear.
After listening to five people, including Palmetto High Student Body President Lane Hunter, speak in support of teacher Lisa Houston Wednesday night, the Anderson School District One Board went into an Executive Session lasting two and a half hours “to receive legal advice.”
Upon returning to open session, the Board unanimously approved allowing their legal counsel to contact legal counsel for the “former employee” “to see if a compromise can be reached between the former employee and the district.”
Approximately 500 people attended the Special Called Meeting of the School Board. Only five speakers were allowed and each was limited to about three minutes. Board Chair Nancy Upton said the first five people who signed up to speak prior to the meeting were the ones chosen to address the board.
Representing a large number of Palmetto High students, many in attendance and standing in support, Hunter spoke first.
“We believe Mrs. Houston was not fairly represented by the situation that occurred between her and the student in the video. Her actions in the video had no malicious intent and were all in good fun. Lisa Houston has had such a monumental impact on all of our lives and many of us wouldn’t be who we are today without her.”
Hunter also said, “She is also an amazing teacher that keeps her students involved and wanting to learn using her unorthodox teaching methods. Whether it’s a humorous song to help us remember an algebraic formula or even jumping on a desk to wake us up when we’re a little drowsy in class. These methods are what keep each student involved and engaged.”
“Lisa Houston has taken out of her personal time to provide free tutoring for current and former students to make sure they are well prepared for success, Her enormous heart and quirky teaching methods are what make Mrs. Houston a tremendously impactful teacher.”
“She helps us with any issues we have. She provides food and clothing to those of us in need and has even went as far as providing Christmas and Thanksgiving to those that wouldn’t have had it otherwise. She has been a shoulder to cry on, on our sad days and one of our biggest supporters on our good days.”
Hunter also read short statements from two other students and a former student.
According to Hunter, Ashley Owens, 11th grade stated “Lisa Houston wants all her students to feel loved and wanted, and she is a great example of a teacher and role model. Anderson School District One this mistake is on you. Please listen to your students and bring Lisa back.”
Also a statement from Colton Hunter, Class of 2016.
“From offering her home as a place to hangout with her son during an awkward senior schedule, assistance with classwork other than math and helping me prepare for my current education at Clemson University, she has been there to assist in any way she could. Lisa is the best teacher the district has ever seen, and I’m sure if it wasn’t for her, Palmetto High would be in a much different state.”
Former student Roderick Houston, M. Ed spoke of the great pride he had to be a Palmetto Mustang. I along with many of my fellow alumni, no longer feel the pride intended when this song was composed,” Houston told the Board.
He said, “Pride is something we felt in our hearts as we reflected on our days here at Palmetto High School. Pride is something we felt when we thought about those educators that made a difference in our lives. Educators that went above and beyond their duty. Educators that made learning fun. Educators that had a place in our hearts and we had a place in theirs. Educators that went that extra mile. Educators that we no longer looked at as just another educator. Educators that we replace the M-R-S with M-A-M-A . Educators like Mrs. Houston.”
Houston also said in addition to helping with tutoring, Mrs. Houston helped cheerleading, basketball, pageants, prom director, teacher and still had time to be a mother.
Houston said he saw both versions of the video and the video with the audio portrays a total different version from the one on the news with no audio, a sentiment that almost everyone asked agreed. “It also upsets me that one “Snapchat” video can ruin a person’s reputation in the blink of an eye. It’s such a shame that future students at Palmetto won’t get to feel the love given by educators, like Mrs. Houston, because they are afraid this may happen to them.”
While waiting for the board to return from the closed door session, several people spoke, prayed, led a cheer for “LISA” and chanted “Houston Strong” to pass time.
Upon returning to open session, it was announced no action was taken in executive session, however an obviously crafted motion was made, seconded and unanimously approved by the board.
The motion made by boardmember Melissa Hood was seconded by boardmember Brenda Ellison.
The action taken was to authorize the Board’s legal counsel to contact legal counsel for the “former employee” “to see if a compromise can be reached between the former employee and the district.”
There was no additional explanation of what type compromise the board members would like to see.
In response, there were a number of “boos” by many in the remaining crowd of approximately 300 people who stayed while the board was in the behind closed doors session to receive legal advice and discuss the situation. It was also noted that the board had food brought in while in executive session.
The seven member board was one short, due to the resignation a week earlier of Board Member Doug Atkins. Atkins resigned over the actions taken by the District regarding Mrs. Houston.