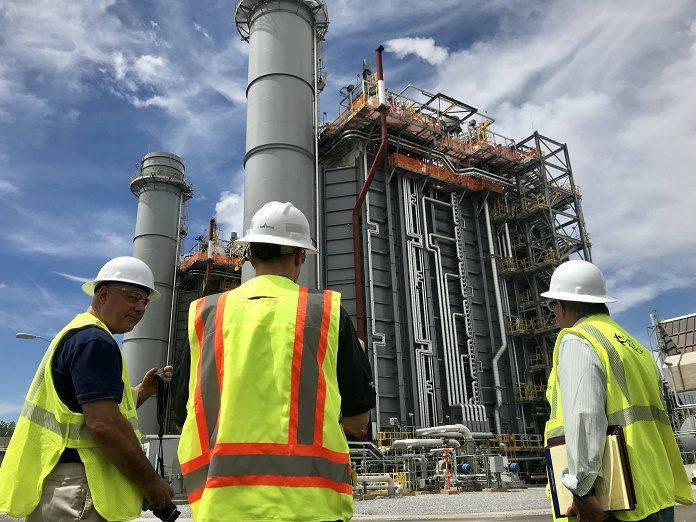 By David Meade
Duke Energy’s new 750-megawatt combined-cycle natural gas plant at the W.S. Lee Station officially began serving customers on April 5.
The clean, high-tech natural gas plant is now operating continuously, benefiting 2.5 million Duke Energy customers in South Carolina and North Carolina.
The Journal was recently invited for a tour of the new facility.
During the tour, Plant Manager Brian Naumuk pointed out the twin combustion turbines and heat recovery steam generators, air intakes, exhaust stacks, a steam turbine and cooling tower that make up the plant.
A network of pipe and valves interconnect the massive parts that make up the facility. A surprising observation is that most of it is not in an enclosed building. Naumuk said that new technology allows it to be constructed that way.
Also on the site are two huge water storage tanks. Water is pumped from the Saluda River, filtered, and run through the closed loop system that makes the combined cycle system work.
The process of reusing the fuel to generate power also serves to cool the waste products. There is no direct discharge of heated water into the Saluda River, reducing possible ill effects on the river.
Emissions into the air are also greatly reduced by the use of newer technology, as well as other state of the art environmental controls.
The efficiency also leads to more power generation.
The two natural gas/diesel turbines can produce 225 mw each. The steam turbine is the most efficient and can produce another 300 MW of power by capturing steam already heated in the process of running the two natural gas turbines/generators.
The steam is exhausted at a temperature of 1200 degrees and the heat recovery steam generator uses the heat from the other units to run the steam turbine.
“The Lee Combined Cycle plant is the most efficient plant in the Duke system,” Naumuk said. According to him, the new plant is operating five percent more efficiently than expected.
“There is a big difference in the closed cycle system,” he said.
Operations for the facility are monitored in a control room with computer monitors and large screens displaying information about the system.
From natural gas flow, water intake, steam temperatures and efficiency to generation of power, everything is monitored in the control room. Only five or six people are there, however a total of forty-five people run the new facility. The new control room also allows operators to run the old Lee Steam Station. There are still three units operating in the original Lee Steam Station.
A 180-megawatt natural gas boiler (Unit 3) and two dual-fuel 42-megawatt simple-cycle units (Units 7 & 8) were upgraded in recent years and remain available to help when necessary, with daily peaks. Unit 3, has operated once in the last 21 days and Units 7 & 8 are available if needed according to Naumuk. He said they operate approximately five to ten percent of the year.
Once state of the art and one of the largest structures in the area, the old Lee Steam Station seems old and small.
The new facility, when viewed up close, is massive. The two steam generators in the new plant alone weigh approximately 210 tons each.
In all, crews poured about 23,000 cubic yards of concrete – enough to fill eight Olympic-size swimming pools, placed 436 miles of cable and wire and installed 29 miles of underground pipe and conduit.
Construction on the project began in March of 2015.
During the height of construction, the project created more than 600 temporary construction jobs and provided about $12 million in work to local subcontractors.
The W.S. Lee project has benefited more than 150 companies locally, in South Carolina, across the U.S. and around the world.
It also had an impact on the local economy, with area businesses and restaurants benefitting from an increase in the number of workers in the area.
Fluor Corp., another company with deep roots in the Upstate, was the combined-cycle natural gas plant’s engineering, procurement and construction contractor.
The new facility is a $700 million investment that addresses growth in the region and accommodates customers’ energy demands now and in the future, according to Duke Energy.
Building highly efficient natural gas plants like the new W. S. Lee Combined Cycle facility is part of Duke Energy’s balanced approach to modernizing the fleet, maintaining a diverse fuel portfolio, managing costs and providing reliable and increasingly clean energy to power the lives of customers now and in the future.
“Investing in a smarter, more efficient energy future through projects like the new W.S. Lee plant is more than just good business – it’s an investment in our state that helps attract jobs and industry and make our economy and communities stronger,” said Kodwo Ghartey-Tagoe, Duke Energy state president for South Carolina. “This project represents a long-term commitment to South Carolina – a $700 million investment in the station, environment and surrounding communities.”
Combined-cycle natural gas units generate energy more efficiently and release significantly lower emissions than coal-fired units.
Emissions from the plant are expected to drop by 87 percent overall in comparison to the station’s previous coal-fired operation.
Duke Energy closed two coal-fired units at the W.S. Lee Station in 2014 and converted a third coal unit to natural gas in 2015.
The company no longer operates any plants in South Carolina that use coal as fuel.
Since 1951, when the original W.S. Lee Station was constructed, Duke Energy has helped power the economic growth in Anderson County and the surrounding communities of Belton, Williamston, Pelzer and West Pelzer.
That local commitment to the region continues through community involvement by the site’s 45 employees, who take pride in giving back to the towns and neighborhoods where they live.
Since 2016, the company and its employees have contributed $425,724 to local communities near the station through Duke Energy Foundation grants and event sponsorships. Duke Energy employees have also volunteered 1,705 hours serving local nonprofit organizations.
The plant has brought other economic benefits to the area.
The new combined-cycle unit is also expected to generate about $4.4 million in tax revenue in 2019 for Anderson County.
The unit receives natural gas through a new dedicated pipeline that branches off the transcontinental mainline.
Crews installed the new 1-mile pipeline and associated metering and compression equipment on existing Duke Energy Carolinas and Piedmont Natural Gas rights of way.
The North Carolina Electric Membership Corp. owns 100 megawatts of the unit’s energy capacity.