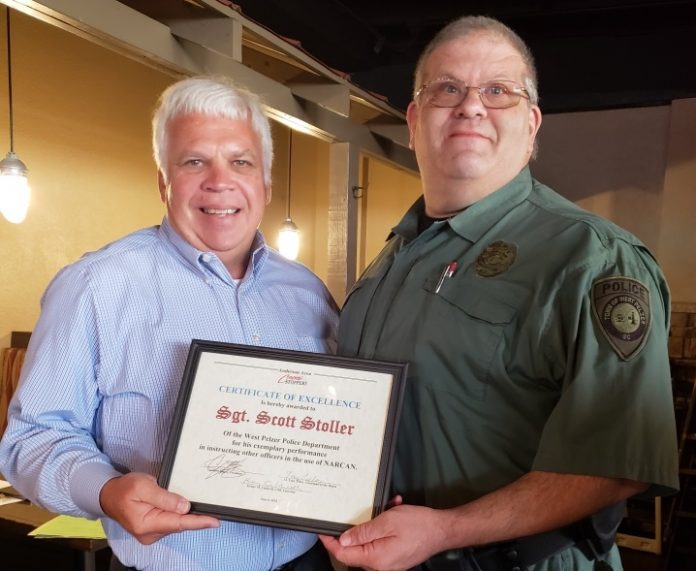 Several local agencies participating in the South Carolina Law Enforcement Officer NARCAN (LEON) Program including Anderson County EMS, Greenville County Sheriff’s Department and West Pelzer Police Department, were recently recognized by the Governor for providing NARCAN Opioid overdose training across the state.
Sergeant Jeff Ward of the Greenville County Sheriff’s Office and Sergeant Scott Stoller of the West Pelzer Police Department were among those recognized at the 2018 SC Governor’s Opioid Summit hosted by the Office of the Governor and the South Carolina Department of Alcohol and Other Drug Abuse Services (DAODAS).
The SC LEON Program was authorized by the 2015 South Carolina Overdose Prevention Act and provides both civil and criminal immunity to doctors, pharmacists, caregivers, and first responders engaged in the prescription, dispensation and administration of Naloxone (Narcan), an opioid antagonist. The law allows first responders, including law enforcement officers, to administer Narcan in cases where opioid overdose is suspected.
The SC LEON team was formed as a collaborative effort between the SCDHEC Bureau of EMS, SC DAODAS, Greenville County Sheriff’s Office, Anderson County EMS & Special Operations Division (ACEMS/SOD), and the West Pelzer Police Department.
Since 2016, the six-member LEON team has trained almost 7000 law enforcement officers in 43 of the state’s 46 counties. With approximately 400 lives saved by law enforcement officers in this state since June of 2016, the LEON program continues to be a resounding success.
The members of the LEON team with the exception of one grant-funded coordinator, perform their development and instructional duties as collateral duties to their regular jobs. Grant funding also provides the Narcan distributed to law enforcement officers and, soon, fire departments.
Two LEON team members, Sergeant Ward of the Greenville County Sheriff’s Office and Sergeant Stoller of the West Pelzer Police Department, are both law enforcement officers and paramedics. Both are grateful for their respective employers’ support of their participation in the program.
Stoller said, “We are lucky to be working for employers who wholeheartedly understand and support our involvement in the LEON program”, said Sgt. Stoller. “It’s all about helping others in need, especially in a life-threatening situation.”
Stoller, who retired as the ACEMS/SOD Director in October of 2017, said when he was asked to join the LEON team at its inception, he solicited support from Anderson County Administrator Rusty Burns.
Stoller says that Burns’ reply was, “Of course, that’s what we do!” Since moving to his position at the Town of West Pelzer, Stoller said “Mayor Blake Sanders and Police Chief Chris Brewer have been incredibly supportive. They know what we are doing is good, and good is what we are here to do.”
While serving as paramedics, Stoller and Ward administered Narcan thousands of times. Since last summer, Stoller has personally administered Narcan three times under the auspices of the LEON program at West Pelzer PD. These measures saved the lives of all three individuals treated, two of whom were in cardiac arrest upon Stoller’s arrival.
The members of the LEON team that developed the curriculum and function as instructor trainers were recognized and presented with awards by Governor Henry McMaster along with SLED Chief Mark Keel and DAODAS Director Sara Goldsby. The recognition award reads, “For the innovation and commitment demonstrated in the development of the Law Enforcement Officer Narcan (LEON) Project that has trained over 6000 officers to save lives through the administration of Narcan to individuals experiencing an opioid overdose.”
The Opioid Summit provided an opportunity for behavioral health professionals, law enforcement, healthcare workers, representatives of state and local government, clergy, advocates, and other caring individuals to come together and collaborate on how to meet the epidemic head on and save lives.