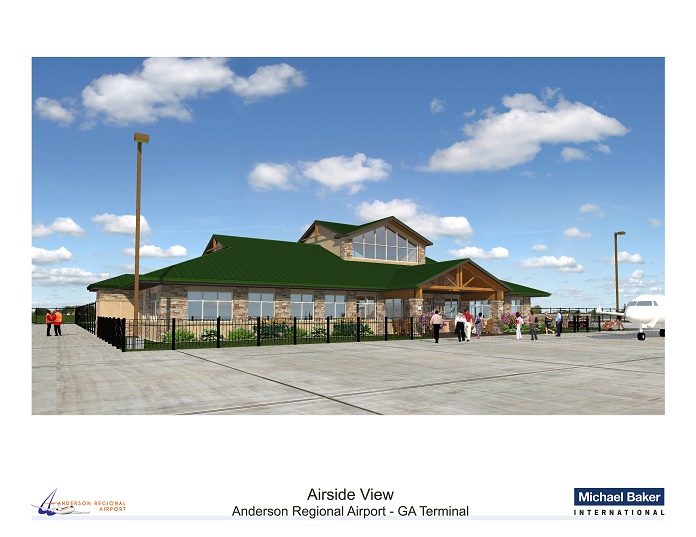 Anderson County leaders ushered in a new era at Anderson Regional Airport with a groundbreaking ceremony held recently for the airport’s new terminal. The celebration will coincided with a ribbon-cutting ceremony for the grand reopening of the airport’s main runway, which has been closed since June for a major pavement rehabilitation project.
“Today marks a very special day in the history of Anderson County, and we would not be celebrating these milestones without the support of a lot of people,” said Anderson County Council Chairman Tommy Dunn. “Our partners at the S.C. Aeronautics Commission, S.C. Commerce, the Appalachian Regional Commission, and the FAA have all made great contributions, but I would be remiss if I did not give special recognition to S.C. House Ways & Means Chairman Brian White.”
Dunn continued: “These projects simply would not have been possible without Chairman White’s advice and support. Brian’s work with his father, Earl, taught him that aviation can have a tremendous positive impact on the community, and we are lucky that we are able to benefit from Earl’s vision and Brian’s leadership.”
“This is a monumental time for our airport and for our community”, said Tom Allen, Chairman of the Anderson County Council’s Ad Hoc Airport Committee. “Anderson Regional Airport receives almost 14,000 visitors each year and generates $13 million annually in local economic activity. We provide services to several local industries and help to make their presence in our community feasible. These are worthwhile long-term investments we are making.”
“I am so very proud of what we have accomplished here at Anderson Regional”, said Airport Advisory Board Chair Don Acevedo. “We are thankful to be working with a County Council that recognizes the value that these investments will generate for years to come.”
Known to aviators by its FAA designation KAND, Anderson Regional Airport has served the community for over 75 years. While still providing service for general aviation users, KAND has evolved over the years into a critical component of Anderson County’s Economic Development program. “The Anderson Regional Airport, in many ways, is the most important Main Street in our community—it’s usually the first part of our community that a corporate decision-maker will see,” said local aviator Hugh Oldham. “The ability for the airport to provide a positive first impression, meet the ongoing needs of corporate travelers, and handle cargo and other traffic generated by local industry, are critical components of Anderson County’s economic development strategy.”
The rehabilitation of the airport’s main runway (17-35) to its current dimensions (length-6,003’, width-150’) was deemed crucial to the county’s efforts to provide service for current and future businesses and industries. Rehabilitation of the runway to a 100’ width was possible and would have represented cost savings; however, a narrowed runway would be unfavorable to many types of commonly-used commercial aircraft, such as the Boeing 727, DC-9, Gulfstream V and 550, and the Bombardier Global Express. These types of aircraft are commonly seen at KAND are used for corporate travel, passenger charters, and freight. Thanks to the county’s investment in the runway rehabilitation project, we can expect to see over 200 operations of these types of aircraft per year at KAND, and over the next twenty years. (SOURCE- FAA Terminal Area Forecast for Anderson Regional Airport).
The new airport terminal is under construction adjacent to the existing terminal. Constructed in 1970, the existing terminal has served the community admirably through many changes in leadership and technology over the years, but it is severely lacking in functional use and modern amenities. The need for comprehensive system upgrades, lack of flexibility for growth, lack of ADA accessibility, and overall condition of the facility’s exterior and interior make renovations unfeasible.
The new terminal will be fully ADA compliant, enhance overall functionality for general aviation users, and provide special focus on the needs of corporate traffic, offering amenities such as: improved parking for up to 80 vehicles; covered access with adequate clearances; wireless access; laptop work areas; separate flight planning and quiet rooms for pilots; conference room facilities for up to 40 persons; and a catering/food prep area. Construction is scheduled to be completed by late summer of 2019, after which time the existing terminal will be demolished.
In addition to its newly-rehabilitated runway and new terminal, KAND boasts a Category I precision instrument approach system, is certified for FAA Part 139 operations (including an Index “A” ARFF station), and a full-service FAA Part 145 aircraft repair station that offers an array of maintenance and avionics services.