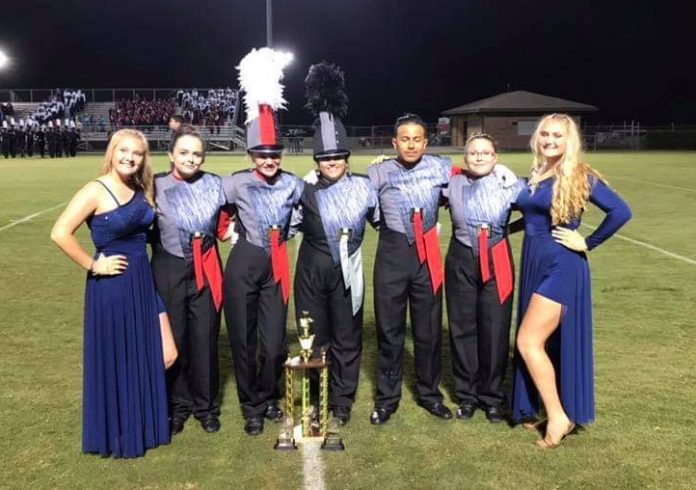 For the first time, all three high school bands in Anderson District One took first place in area band competitions. Palmetto High Band, Powdersville Band and Wren Band all placed first place on Saturday October 13.
Palmetto High Band is under the direction of Gary Frazier. Mr. Frazier said, “The Palmetto Marching Band has had a great 2018 competitive marching band season! The Mustang Regiment won 1st place in class 2A at the Pride of Pendleton Marching Classic as well as Best Color Guard and Best Visual Performance. The band finished in the top twelve at the SCBDA 3A Upperstate Championships for just the third time in school history in the 3A class.” Trey Ferrell is the Powdersville High Band director. He said, “The Powdersville High School Marching band is pushing hard this week, leading up to the SCBDA 2A State Championship to be held at Spring Valley High School.
So far these students have earned numerous awards and captions at the Olde English Festival of Bands in Rock Hill, the Henry Laurens Invitational in Laurens, BandBEAT in Rock Hill, and the Tournament of Bands in Blythewood.
Just this past Saturday the Patriot Marching Band qualified for State Competition by earning 2nd place in 2A Upper State at Boiling Springs High School. These successes are attributed to the fantastic design team, directors and staff, and of course the incredibly hard working students of Powdersville High School.” The Wren High School Band is under the direction Chuck Hamlett. “The Wren Band is having an outstanding year, Hamlett said.  “This season, the band has earned Best Color Guard and 1st place in class IV at the Boiling Springs Festival of Bands, Best Music, Best Percussion, and 1st place in class IV at the C Phillip McIntyre Tournament of Bands, and Best Color Guard, Best Music, Best Visual, and 1st place in class IV at the Pride of Pendleton Marching Classic.  On ??? the band will be competing at the South Carolina 3A State Championships.”
Jane Harrison, Assistant Superintendent for Anderson One, said, “This is the first time I can remember all three schools taking first place on the same day. They have very strong programs and we are so proud of the way they represent our district across the state.”