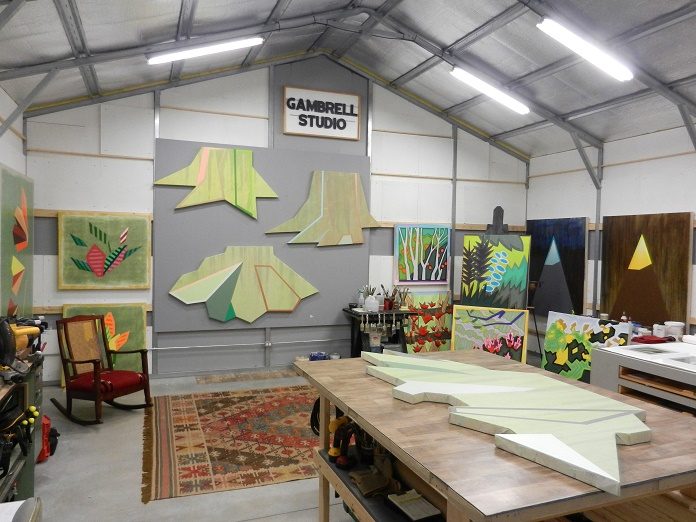 Andy Gambrell has lived and painted in some of the world’s most renowned cities including New York City, Paris, Miami, Atlanta and Hong Kong. His work has been featured in over eighty exhibitions, and is collected internationally. Now he is bringing the art world to West Pelzer.
Gambrell’s Art Studio, located in a white metal building behind his house at 27 Spring Street, in West Pelzer, will be part of Greenville’s Open Studios Tour this weekend.
The studio will be open to the public on Friday Nov. 9th from 6pm-9pm, Saturday Nov. 10th from 10am-6pm, and on Sunday Nov. 11th from noon until 6pm.
Gambrell is one of 143 artists featured in the self guided tour.
“The intention is to allow people to see where and how artists work,” Gambrell said.
Greenville Open Studios is a weekend event which opens the studios of local visual artists to the public. The event is held annually in November, and showcases artists at work in their studios.
Now entering its 17th year, Greenville Open Studios began as an idea cast about during a casual conversation between a small group of artists several years ago.
They discussed doing something to raise awareness in the greater community of the tremendous creative energy in the area. The idea has evolved into a full-fledged annual event.
The 2018 self-guided tour includes studio locations in a 15-mile radius of downtown Greenville with Easley, Greer, Travelers Rest, Simpsonville, and West Pelzer included.
Open Studios event brochures can be found at all the studios, at West Pelzer Town Hall and are available on the Greenville Arts website.
The goals of Greenville Open Studios are to provide free and convenient community access to visual arts, to educate and create a dialogue between artists and the general public by opening artists’ place of work and inviting the community-at-large to participate in the creative process, and to create new marketing opportunities for artists.
According to their website, “It is the organizers’ desire that the project will open up the world of visual artists to everyone – from the seasoned collector to the first-time art buyer to the curious general public.”
Gambrell is a mid-career American Painter. He studied art and art history at the South Carolina Governor’s School for the Arts, Furman University, The School of Visual Arts in New York City, and at the University of Miami.
Gambrell has trained artists for thirteen years and has developed extensive university curricula in painting and art history.
He served as Director of High School Operations for the Princeton Review Headquarters in South Florida, Director of the University of Miami’s CAS Gallery, and founding director of UM’s Wynwood Project Space.
He has taught for the University of Miami, Elizabeth City State University, Furman University, and the Savannah College of Art and Design in Atlanta and Hong Kong.
He also lectures nationally, writes art criticism, and mentors a diverse group of exceptional aspiring painters.
Gambrell said he sees his work as part of a dialogue with art history, but in a more immediate way. “The work is a response to my visual environment in South Carolina. I try to simplify nature to the point where it looks monumental. I boil out all the extraneous details and put in as few pieces as necessary to have as much impact as possible.”
The local art studio recently hosted advance painting students in the Painting III class under Peter Kaniaris, Professor of Painting for the South Carolina School for the Arts at Anderson University,
“My goal in establishing my studio in West Pelzer is to support the advancement of the visual arts in the Upstate. I am happy to serve as a resource for serious aspiring painters in our region,” Gambrell said.
For more information on the Greenville Open Studios Tour or Gambrell’s studio, check out the Greenville Arts website at www.greenvillearts.com/mac-programs/greenville-open-studios/ or call (864) 365-7146, Gambrell’s website at www.andygambrell.com or email Gambrell at andy@andygambrell.com.