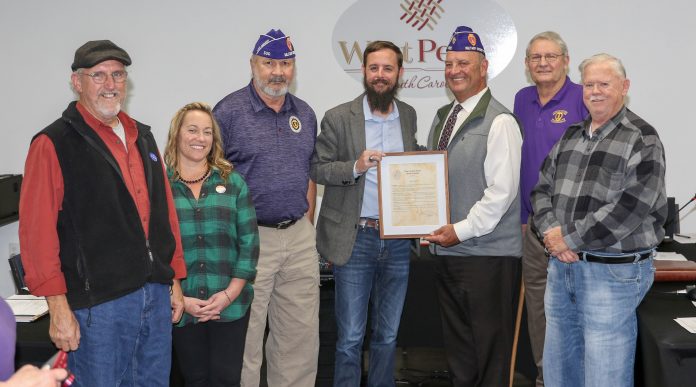 By David Meade
During their meeting Tuesday, West Pelzer Town Council discussed nuisance animals, leaf and limb pickup and a new sign ordinance. They also recognized area Veterans and approved a proclamation recognizing West Pelzer as a Purple Heart City.
Chapter Commander Sammy Lewis said the Military Order of the Purple Heart once had around 3000 members and now only has 1100. The Anderson Chapter had 530 and now has only 79 members.
The organization is there to help veterans, Lewis said.
Adjutant Commander Phil Harris said the four members present for the signing of the proclamation were all Vietnam Veterans and were there for each other.
“I love my organization and I love my fellow Vets,”he said.
He said the organization was formed “to make sure kids coming back don’t get treated the way we did.”
Also attending was Chaplain Stan Brown and photographer Mike Gowan.

During citizens comments, there was considerable discussion about roaming chickens and cats in the town. The issue was also addressed by a member of the planning commission later in the meeting.
Planning Commission member Andy Gambrell said the Planning Commission had looked at the problem of nuisance animals and how it could be handled at the county level.
He suggested the town re-draft the code of ordinances. Under the current ordinance, animals taken to the county end up coming back to the town, he said.
Gambrell also recommended Council decline a mobile home variance to replace an existing single wide. Gambrell said they had previously denied a request by the former owner and based on that decision, recommended not allow a variance by the current owner.
Council accepted the recommendation 4-0 . Councilman Donnie Jeanes was not present.
Council approved first reading on a new sign ordinance which was tabled in April of 2017.
Gambrell said the Planning Commission had reviewed the proposed ordinance which he said “is well written and would be beneficial as a supplement to our code of ordinances.”
Council is planning to hold a worksession on the sign ordinance at 6 p.m Dec. 4. A public hearing will also be scheduled before second reading is held during the Dec. 4 meeting of council.
Council tabled a request by Will Ragland for funding to help pay for a monument sign for the Mill Town Players at the Pelzer Auditorium.
The request for $1200 will help pay for the $25,327 sign and includes sponsorship of a show, according to Mayor Blake Sanders.
Ragland will be invited to attend the next meeting and provide additional information.
Council also tabled the issue of closing a well located on town property behind Chapman Park. The well must be closed to DHEC standard for abandonment of a well, according to Mayor Sanders.
A local provider submitted a price of $2500, however Council asked the mayor to get two additional bids for the project.
The Town is starting a pilot program for leaf and limb pick-up over a three month period.
Yard waste items will be picked up during the third week of each month.
Leaves and grass clippings must be in plastic bags and only tree limbs up to six inches and less that six feet in length will be picked up.
Pickups must be requested in person at Town Hall, by phone at 947-6297 or by using the online portal for work orders.
The town will also allow burning of leaf and limb debris on the first and third Saturday and Wednesday through March.
Mayor Sanders announced that the Mistletoe Market on Main event will take place this Saturday, Nov. 10, from 9 am until 3 pm. in Chapman Park.
Also Andy Gambrell’s Art Studio at 27 Spring Street in West Pelzer, will be part of Greenville’s Open Studios Tour this weekend.
The studio will be open to the public on Friday Nov. 9th from 6pm-9pm, Saturday Nov. 10th from 10am-6pm, and on Sunday Nov. 11th from noon until 6pm.
Gambrell is one of 143 artists featured in the self guided tour.