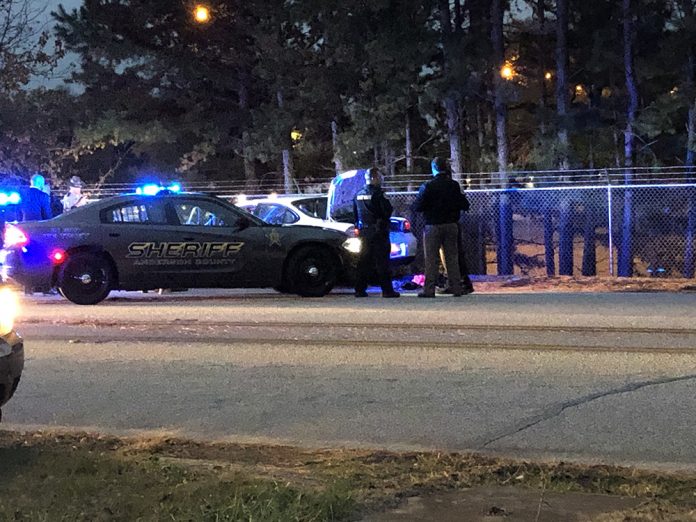 By Stan Welch
On Thursday, November 29, Anderson County Sheriff’s Deputy and canine handler Kevin Shaw was working with the street narcotics unit (SNU) when he was notified of a white Pontiac Grand Prix leaving a known drug site that was under surveillance. Shaw followed the vehicle’s reported path and located it near the thirty mile marker on I-85 northbound.
He fell in behind the vehicle and clocked it at 79 miles per hour, in a sixty five mile an hour zone. He initiated a traffic stop at mile marker 31 and approached the vehicle along the passenger side. As he approached the front door, the vehicle sped away and exited at the Pelzer ramp, onto Highway 8, headed towards Pelzer. By the time he reached Hwy. 29 Southbound, speeds had reached a hundred miles an hour.
Near the intersection of Hwy. 29 and Stringer Road, Shaw saw the driver throw something from the car. When it struck the ground, a loud of white powder flew up. Shaw notified other ACSO units that had joined the chase, and they stopped and located some powder that was later identified as methamphetamine, as well as some marijuana. The methamphetamine as determined to be a distributable amount.
In the meantime, the pursuit turned onto Williamston Road, and then onto East Greenville Street. The perpetrator attempted to turn right onto East Greenville and hit another car, driven by Delane S. Timothy, a sixty nine year old white female from the Columbia area. The driver of the Grand Prix continued to flee.
Due to the danger to the public, Shaw requested authorization to perform a forcible stop, and subsequently conducted a pursuit interruption technique, or PIT stop. The driver then struck Shaw’s cruiser before other units arrived and blocked him in. The car was identified as stolen from Lexington County, where the driver, Nicholas Austin Hendrix, WM, 25, 5’11”, 175 pounds, with brown hair and blue eyes was apprehended nd taken to the ground. He was eventually booked for possession of methamphetamine, failure to stop for a blue light, and possession of stolen property.