By David Meade
The Anderson School District One Board of Trustees began their Nov. 26 meeting with the swearing in of recently elected members, including one new board member.
Pat Cox, Nancy Upton and Melissa Hood were all returned to their seats on the board. Newly elected member Wendy Burgess joined them in taking the oath of office.
The board elected Nancy Upton Board Chair, Brenda Ellison Vice-Chair and David Merritt Secretary.
Mike Wilson will represent Anderson School District One on the Alternative School Board. Upton and Hood will serve on the Anderson School District One and Two Career and Technology Center Board.
The board heard an audit presentation by Ken Meadows of Greene and Finney LLC auditors.
Meadows said Anderson School District One received an “unqualified opinion”, which is the best it can receive.
Meadows told the Board the District is in good financial shape and that the total General Fund Balance had increased by $1.3 million to $17.2 million.
Meadows said the fund balance amounts to 24.5 percent of the fiscal year 2018 expenditures, which is well above the GFOA recommended 16.7 percent, or two months of reserves.
Meadows presented other information reflected in the audit including where revenues came from and explained a $4.4 million, or 6.5 percent increase over 2017.
The District saw and increase of approximately $1 million from property taxes. The increase was primarily due to an increase in the millage rate and assessed values of property in Anderson County. There was a $3.1 million increase in state sources and $.3 million increase in other local revenues.
Expenditures increased $1.9 million, or 2.8 percent over 2017. This was due to a $2.4 million increase in instruction salaries and benefits, a $1.3 million increase in support services (salaries and benefits) and a $1.8 million decrease in capital outlay, according to Meadows.
The District was able to transfer $3 million from the General Fund to the Capital Projects Fund in June.
Even with the increase in salaries and benefits, the District was still $2.7 million under budget, which Meadows said was primarily due to lower than budgeted salaries and benefits.
The debt service fund had a $3.6 million fund balance. The funding is from the local option sale tax (LOST) revenues collected by Anderson County.
The Capital Projects Fund has a $7.3 million fund balance including LOST revenues of $4.3 million that were unspent during 2018 and the $3 million that was transferred from the General Fund.
There is $2.4 million committed for projects already underway including $500,000 for the Roe Road connector project; $.2 million for the athletic facility at Palmetto High; $.6 million for architectural and design service and $1.1 million for the purchase of iPads in July of 2018.
There is a $2.1 million carry over for Special Revenues which includes 36 special programs and 25 EIA programs.
Food Service had a fund balance of $2.4 million, an increase of $.4 million.
Capital Assets increased by $2.6 million. Included are building additions of $7.7 million; $2.9 million in equipment and technology; building and improvements at several schools amounting to $4.6 million.
Among those are completion of the Wren High and Powdersvile High athletic facilities and Concrete Primary addition, the Roe Road connector and the Palmetto High multi-purpose facility.
Total debt decreased by $5.6 million and outstanding debt amounts to $63.6 million.
Total debt payments for 2019 are expected to be $5.8 million for principal and $2.4 million in interest.
The District has the capacity to issue $14.8 million of additional debt without voter referendum.
District One is currently preparing for a voter referendum for improvements 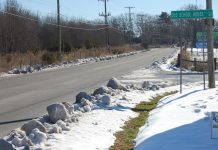