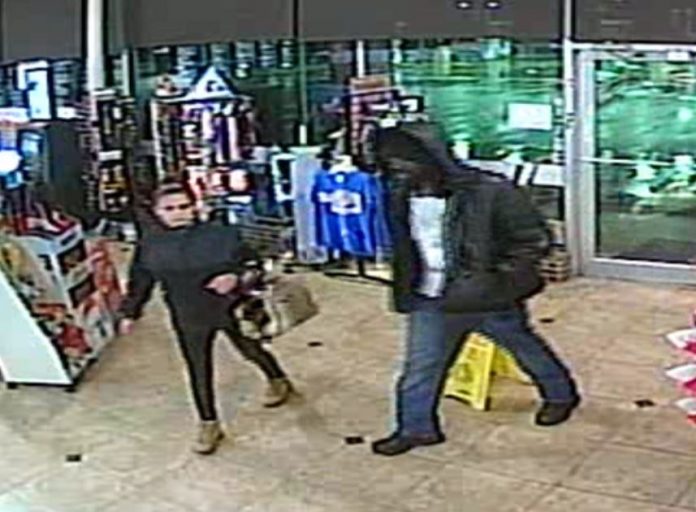 The Anderson County Sheriff’s Office is asking the public’s help in identifying two Powdersville area robbery suspects. On the mornings of December 4 at approximately 2 am and December 10 at approximately 1:30 am, a male subject entered the 7-Eleven store on Highway 153, Greenville and demanded cash from the attending clerk. He also stole packs and cartons of cigarettes. He was accompanied by a female subject on the morning of December 10.
The black male subject is described as being approximately 6 feet 2 inches tall wearing a black beanie, blue jacket, light blue athletic jersey and blue jeans during the first incident and a white T-shirt and a black jacket/hoodie during the second incident. During the second incident, the white female subject, who is approximately 5 feet 4 inches tall, was wearing all black clothing with tan hiking boots. She had red hair pulled up into a bun.

In both incidents, a silver or gold colored Chevy Malibu or similar four-door sedan was used to flee the scene.
If you recognize these individuals or have information about these incidents, please call the Anderson County Sheriff’s Office Detective Bureau and speak to Investigator Chau at (864) 222-6667.
Citizens can also choose to report tips through Crime Stoppers by calling 1-888-CRIME-SC (274-6372).