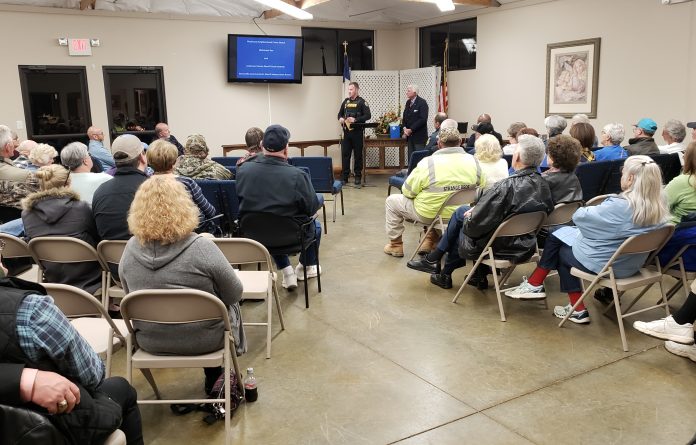 The Piedmont Neighborhood Crime Watch group recently hosted a meeting attended by sheriffs of both Anderson and Greenville Counties.
Anderson County Sheriff Chad McBride and Greenville County Sheriff Johnny Mack Brown both spoke at the Nov. 27 meeting.
“It was awesome to have Piedmont’s Anderson and Greenville County Sheriffs attend our meeting, since Piedmont is actually in two counties,” said Piedmont Neighborhood Crime Watch committee member Ede West.
More than seventy-five people attended the meeting including Anderson County Councilman-elect Jimmy Davis, A. T. Smith, Chief Marcus Davenport, David Baker, Director of Anderson County Emergency management Division, Detective Ben Carson and other deputies that patrol in the Piedmont area.
Representatives of the narcotics division were also present.
Topics of discussion included new K9 dogs in Greenville County and instant critical briefings that are available through the Greenville County website.
Sheriff McBride said that Anderson County has 800 square miles to cover in the county with 23 deputies per shift. He said their goal is 30 deputies per shift. McBride also said another goal is to build a K9 unit for Anderson County. They currently have seven in the K9 unit and are working toward ten. McBride also said that Anderson County has two man teams working on I85 and that nearby Atlanta, Georgia, not Miami, Fla., is now the drug hub of the country.
He also reported on the jail situation in which there are 400 to 450 inmates in the jail designed to hold 250 people. He said they need a larger facility.
Sheriff Brown said that their latest addition to the K9 unit was purchased with drug money.
He also said that residents can find out what is going on in Greenville County by texting GCSO95577.
Both Sheriffs encouraged everyone to look out for their neighbors, to alway lock cars, to not leave valuables in a vehicle and to re-route packages.
The Piedmont Crime Watch Committee invites everyone in the Piedmont area to attend meetings. The next meeting is scheduled for Feb. 26 at 6:30 p.m. at the Piedmont Wesleyan Church located on Piedmont Hwy.
“Many thanks to Pastor Warren Gentry, wife Donna and the congregation of the church for being our partners in this community venture,” West said.