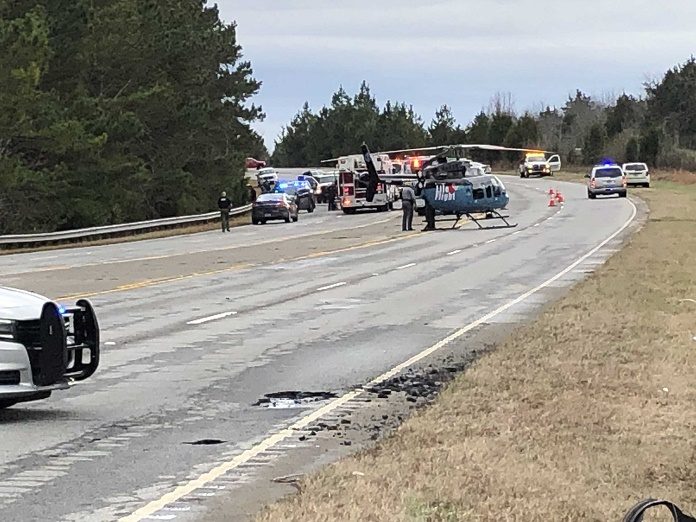 LifeFlight sits at the scene of a wreck on Augusta Road on New Years Day, Tuesday afternoon. The Laurens County sheriff’s office was pursing a car when it wrecked near Columbia Road. It took rescuers from Dunklin and South Greenville fire departments over a half hour to free one of the occupants. Another occupant fled on foot. Greenville County EMS transported the injured occupant to Greenville Memorial Hospital. (Photo by David Rogers)

Deputies from the Greenville County Sheriff’s Office responded to the area of Augusta Road and Princeton Hwy to assist Laurens County Sheriff’s Office in reference to a vehicle that was fleeing from them and had wrecked.
According to reports, the Highway Patrol in Laurens County was pursuing the same vehicle earlier and had cancelled the pursuit. A short time later, Deputies from Laurens County began pursuing the vehicle and pursued it until it wrecked in South Greenville County. One person was entrapped in the vehicle and had severe injuries. Another subject, describes as a mal wearing a red shirt fled the scene on foot. The Sheriff’s Office received a call shortly after 2pm from a resident in the 10000 block of Augusta Road in reference to a suspicious person matching the description running thru the woods. The homeowner did discharge a weapon into the air. Deputies are began looking for the subject with the assistance of Sheriff’s Office K9’s and helicopter.

Deputies from the Sheriff’s Office Traffic Reconstruction Unit will be investigating the wreck and further details will be released as they become available.

Around 4:45 pm New Years Day, Deputies called off the search for the passenger that fled the scene of the pursuit/wreck. The fleeing passenger is described as a male subject, 6’ , 180lbs with medium length hair wearing a red shirt. If anyone in the area sees a subject matching this description, they are asked to call 9-1-1 and not to approach the him.