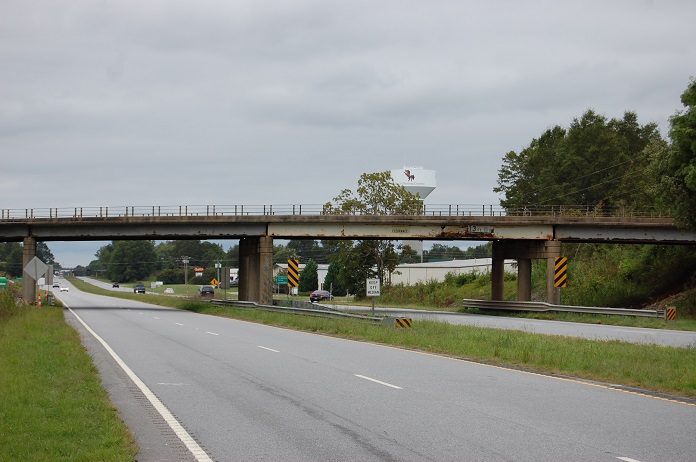 By Stan Welch
After a decade of discussion and empty promises, the SCDOT finally scheduled the Cherokee Road bridge over Hwy. 29 for redesign and renovation last year. This year was to be the year that the inadequate bridge and the poorly designed access roads nearby were going to be modernized and made safer.
Those expectations took a major hit recently when the DOT announced that the project had been moved back two years, till 2021. District Seven County Councilwoman learned of that decision recently from the district engineer. Wilson reminded The Journal that former county councilman Frances Crowder had obtained a significant percentage of the funding for the project from the Appalachian Council of Government, leading to the promise that work would begin on the project this year.
No explanation was forthcoming, a circumstance that members of the county delegation are seeking to address. Senator Mike Gambrell scheduled a meeting with SCDOT director Christi Hall to find out what led to the change in scheduling. Representative Anne Thayer said her best guess was that recent weather events across the state may have compromised some bridges and other structures, leading to a reassessment of resources. “That is strictly a guess on my part at this time. Once Senator Gambrell speaks with Ms. Hall, we’ll have a better idea.”
Senator Gambrell expressed his surprise at the news of the proposed delay. “I have asked for a meeting, and I anticipate that the entire delegation (which Gambrell chairs) will issue a letter seeking to return this project to its place in the line. This has been going on for more than a decade, and we feel that the entire county is impacted by these problems, and in fact a good portion of the Upstate. Highway Twenty Nine remains a heavily traveled thoroughfare.”
Thayer agreed, saying “We have certainly been patients. I will certainly support the Senator’s efforts, and feel certain that the rest of the delegation will as well.