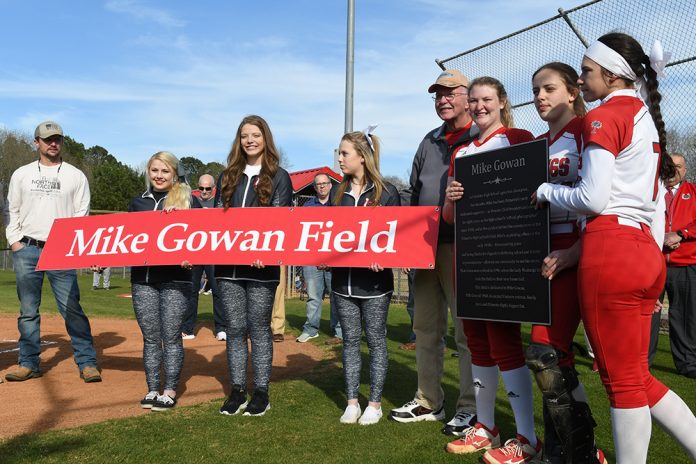 The Palmetto High School softball field is now officially named “Mike Gowan Memorial Field” following a ceremony held Tuesday. A crowd of former and current athletes, students, parents, school district officials and others gathered for the special event Tuesday.
Gowan has been a devoted supporter of Palmetto High School athletics and events and can be seen at most any school related event. He was the athletic booster club president and member for eight years. He is known as the official school photographer and for taking photos for The Journal. Gowan posts many of his photos online and gives them away to students and parents. Football, basketball, Miss Palmetto, Spring Sports, Prom and graduation, Gowan has been there year in and year out. One of his dreams was to see a home field for the softball team. Through his efforts and support, and from others, the Palmetto High softball complex was opened on March 12, 1996. Since then the PHS softball team has numerous winning seasons and a state championship.
Teacher Stephanie Summerlin wrote the presentation which was read over the PA system. “Mike is Palmetto High School’s greatest champion,” it says, “not in the sense of being a champion on the field, but behind the scenes.”
In the early 1990s he mowed grass, laid blocks for a dugout and lobbied school and district officials about the need for a home softball field. “One has to wonder, without Mike working so hard to give the Lady Mustangs this beautiful playing field, how our softball program could have enjoyed the success it’ s had. Since 1996, Palmetto has racked up numerous winning seasons on the diamond that Mike helped create, including a 2012 AA SC State Softball Championship.”
“For decades, Mike has been Palmetto High’s most dedicated supporter, as Booster Club president and member for eight years, as the school’s official photographer since 1988.  All Mustang athletes, from football players and cheerleaders to soccer players and wrestlers, can attest that Mike Gowan was and is always there capturing moments of competition they will treasure for the rest of their lives.”
Gowan is a member of the Palmetto High Class of 1968. He served in Vietnam and was the recipient of the National Defense Service Medal, the Vietnam Service Medal and a Purple Heart. He and his wife Betty have two sons, Michael and Greg and grandsons Hunter and Easton. “He has a heart for God, for family, and for his community,” Sum said.
“Mike, Mustangs past and present, would like to thank you for your hard work and dedication to all things Palmetto. It is my honor and privilege that on this day, March 19, 2019, we dedicated this field to Mike Gowan, PHS Class of 1968, decorated Vietname veteran, family man and Palmetto High’s biggest fan.”