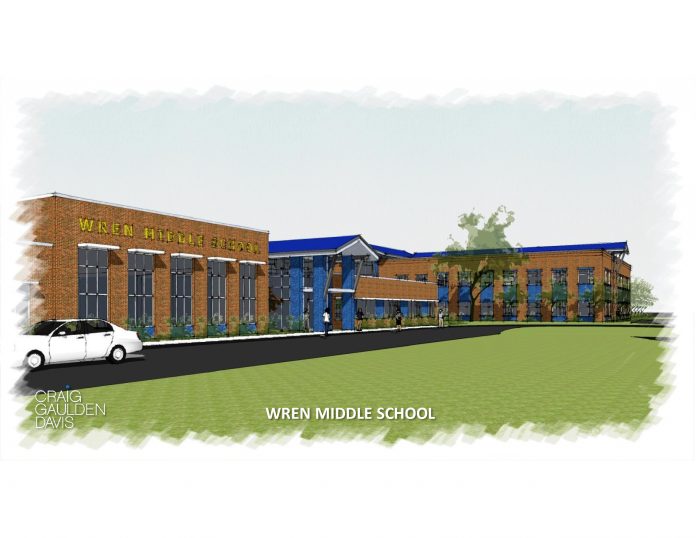 By David Meade
Anderson School District One Superintendent Robbie Binnicker updated the District One School Board on the building program during their meeting Tuesday evening. The update came as voting on the bond referendum for the building program was finishing up. Binnicker reported that the district had received a guaranteed maximum price on site work for the two new middle school projects that are a big part of the proposed building program.
Two aging middle schools, Palmetto Middle and Wren Middle, which both served as high schools in the past, are to be almost completely replaced in phases on their current sites.
Binnicker said that weekly meetings with Harper construction resulted in significant savings in the original estimates for site work for the projects. One area of savings was in the timeline for the Palmetto Middle project, which was 144 weeks. Binnicker said they pushed to have it cut significantly because the quicker the project is done the more the savings. He said sitework would take 13 weeks and could begin as soon as Monday, depending on the referendum vote, which passed by a 3-1 margin Tuesday (See separate story).
Total Guaranteed Maximum Price for the Palmetto Middle sitework is $4,075,195. Guaranteed pricing came in at $257,181 for General Conditions; $1,821,518 for Site and Utilities, $1.858,687 for Allowance Items and $137,809 for Fee to contractor. Allowances for demolition, soil treatments, asphalt paving, site concrete, concrete curb, fencing and landscaping will be reconciled with the building price. Binnicker said site costs for Palmetto Middle “turned out to be much less expensive than we thought.” The price for earthwork is $201,614 less than originally estimated in January. “It turned out to be easier than we thought,” Binnicker said.
Six of the nine items listed were less than originally projected. Earthwork turned out to be $201,614 less at $931,055. Temporary Erosion Control and Fire and Water Services were more. Total site GMP came in at $494,090 less that projected in January.
Binnicker said some trees have already been removed in preparation for a catch basin and retention ponds at the Palmetto Middle site. Demolition of an old building should also be completed this week, he said.
Approximately $2 million in original site allowance costs will be reconciled with the building price.
Wren Middle turned out to be “More complicated than thought,” Binnicker said.
Earthwork is $223,477 more that projected in January, at $1,230,770 due to more dirt. Fire and Water is $308,972 more, at $400,780 due to two fire hydrants having to be moved and two vaults constructed for them. On the Wren Middle project sitework, the GMP is $4,579,952. General Conditions is $199,527; Site and utilities $2,297,738; Allowance items $1,927,809 and Contractor Fee $154,878. Timeline for construction is 139 weeks. General Conditions timeline is 10 weeks.  The same seven items listed for Palmetto Middle will be reconciled with the building price.
They total $1,995,282.
Palmetto Middle will have one 7th grade wing addition that will not be replaced.
Wren Middle will have one 6th grade wing addition that will not be replaced.