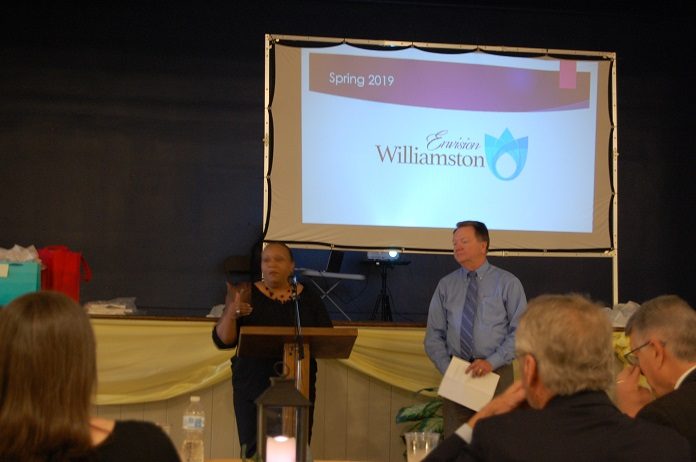 Approximately 100 people, attended the “Our Town Matters” event held in Williamston last Thursday. The event included networking and seven speakers on a variety of topics related to the area. (Pictured Rene’ Pressley and Dr. Marion Williamston talk about Envision Williamston and what it brings to the community.)

Career and Technology Center Director Hollie Harrell said the CTC serves 2000 students from four high schools and offers 19 programs. Internships with local business and industry is a big part of their curriculum Harrell said they had 2400 intern experiences. The center is “at capacity” and turning students away. They offer industry certifications and college credits. Their students have had many accomplishments as well as state and national awards.

Anderson School District One Superintendent Robbie Binnicker, spoke about the District One Building Program and upcoming Bond Referendum. He said the total cost of the project is approximately $132 million. The new building program will include construction of new Palmetto and Wren middle schools, classroom additions for schools that are at or over capacity, critical renovations at schools that need them and improve safety at all fourteen District schools. “Safety and security issues are very important,” he said. “Security is very different than six or seven years ago.”

Williamston Mayor Pro Tem Tony Hagood talked about a partnership with Anderson District One which he said is “producing quality people” while the mayor and council “are producing a quality town.” He said Williamston plans to continue to enhance facilities as they have done with the Auditorium and Park, “to bring together families and residents that make Williamston “the great town we are.” He said the town wants to show unity.
Palmetto Business Association President Roxanne Hall spoke about the actions and efforts put forth by members.
“We come together to make our town better and to support the town,” she said. “I am amazed by the actions and efforts put forth by each member,” she said. The association has been involved free community events like Party in the Park and the Easter Egg Hunt. They are also partnering with the MLK Foundation to offer scholarships to local middle school students, who Hall said “are our future leaders.”
Rene’ Pressley and Dr. Marion Williams represented Envision Williamston.
Pressley said the organization promotes vitality and economic stability through a wholistic approach to economic development. She said it “encompasses everyone”. She read she said are the “Heart of the Community” and said “Williamston is a welcoming place for every single person on our community.”
Dr.  Williams talked about the Envision Williamston projects including “warm” welcome signs, banners, and murals that have “really beautified our town as well.” “We are making a difference in out town,” he said. He thanked director Sonya Crandall for doing a fabulous job and ambassadors and volunteers who help with the program.
Developer Richard Greer, spoke about the planned “Saluda Falls” developments in Piedmont, Pelzer and near Williamston along the Saluda River. Greer said State Investors, who he represents, works to revitalize old textile manufacturing sites. His development in the area began with an agreement with the Pelzer Heritage Commission on the old Pelzer Mills sites and they are planning to develop property at the old Piedmont Manufacturing site in Piedmont.
He said Williamston looks like a good place to grow the area along the Saluda River. He said one of the highlights of the projects is that Enel Energy, which owns power plants on the Saluda at both sites, may be able to provide electricity to the new developments. Piedmont includes apartments and town houses or condos and a river front public park. He said plans call for a trail that connects Williamston, West Pelzer, Pelzer and Piedmont to be a part of the project.
In Pelzer the two mill sites have been cleaned up and are ready for development. One of them is the oldest operating power house in the US, with equipment designed by Thomas Edison in 1894 and still operating, he said.
“We have an opportunity to use power generated by Enel to power Saluda Falls. We feel it is a doable situation. it would be a tremendous public relations for anybody in this area to say the are using hydro power, green power,” Greer said.
SC House District 9 Representative Anne Thayer was Mistress of Ceremonies.