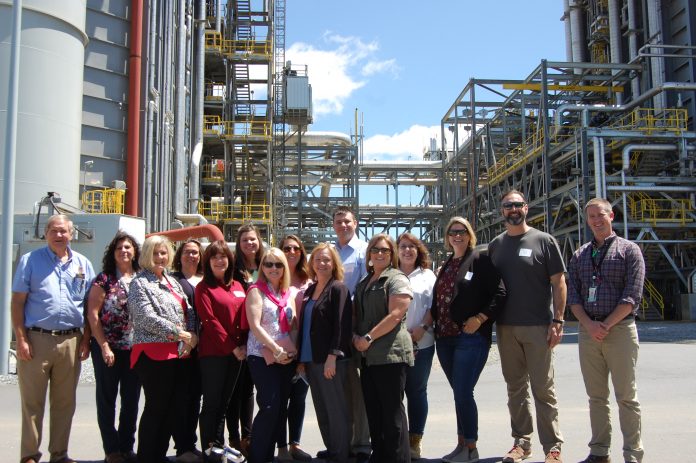 Members of the Palmetto Business Association recently participated in a tour of the Duke Energy W. S. Lee Station.
The 750-megawatt combined-cycle natural gas plant is celebrating one year of providing energy and remains the most efficient facility in the Duke system.
The new 750 megawatt combined cycle plant began serving customers in April of 2018 and is the most efficient facility in the Duke system according to Government and Community Relations Manager Emily DeRoberts.
The group of approximately 22 people included area business leaders and they were joined by House District 9 Representative Anne Thayer.
Site Manager Matt McMaster, Greg Mayfield, Clark Bagwell and DeRoberts presented information about the facility and answered questions before breaking into smaller groups for a walking tour.
The facility is located on 700 acres adjoining the Saluda River just outside of Williamston. The William States Lee Station includes a new 750-megawatt combined-cycle natural gas plant, a 180-megawatt natural gas boiler and two dual-fuel 42-megawatt simple-cycle units. Combined, the station generates about 1,000 megawatts of energy.
The new natural gas plant started serving customers in April 2018 and helps provide electricity to 2.5 million customers in the Carolinas.
In 2014, Duke Energy retired two 1960s-era coal-fired units at the original station and converted a third unit (mentioned above) to natural gas in 2015.