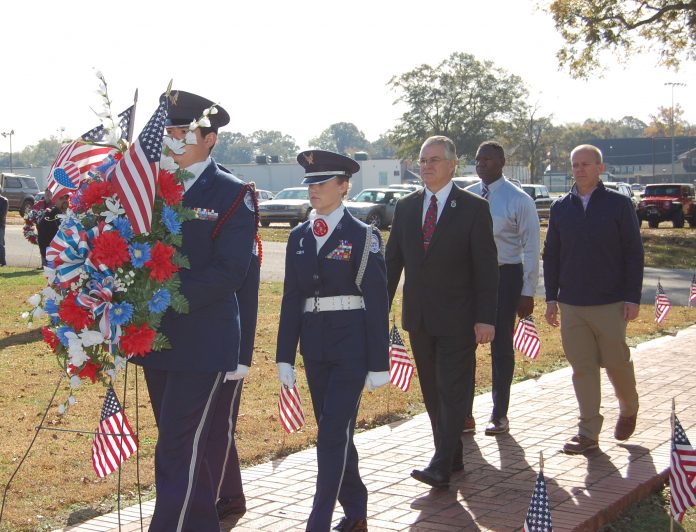 The Town of Williamston and the Palmetto High School AFJROTC unit held a Veterans Day service to recognize local veterans and honor those who gave their lives in service to the country.

The program was attended by WWII Veteran Army nurse Rosemond Kohmstedt, who at 99 years old is one of the oldest living Veterans of World War II. She served with the 65th Field Hospital in Europe taking care of injured soldiers in General George Patton’s 3rd Army through three different Campaigns including Rhineland, Ardennes and Central Europe. (See separate story)

The program included presentation of colors by the Palmetto High School AFJROTC Color Guard, playing of the National Anthem and Pledge of Allegiance to the Flag. Hailey MacNary sang the National Anthem.
Big Creek Baptist Church Pastor and Vietnam Veteran Ron Fousek was the guest speaker.

Cadet Julie Buckner rang a bell as each of the names of local veterans of World War I, Word War II, Korea, Vietnam, and Afghanistan that are listed on the veterans memorial were read.