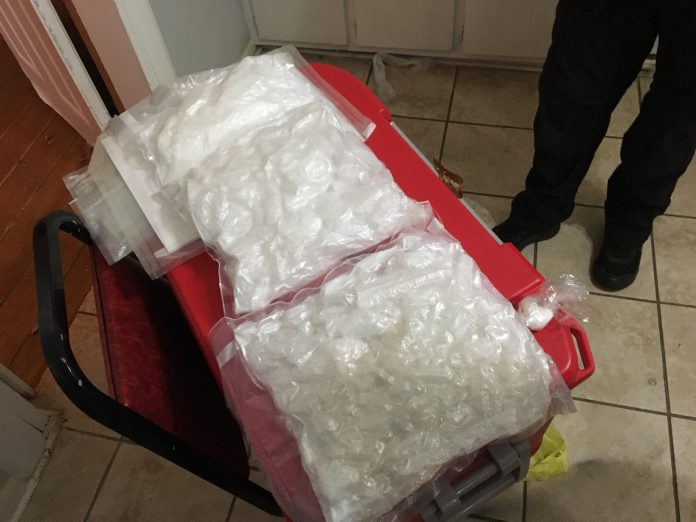 Approximately 6 pounds of Methamphetamine was seized

The Greenville County Multi-Jurisdictional Drug Enforcement Unit recently conducted a drug investigation with the help of the Jefferson County Sheriff’s Office in Birmingham, Alabama resulting in arrests and seizure of multi-kilos of methamphetamine and U.S. currency.
Through the investigation, investigators identified two individuals, Jhonatan Ruiz and Juan Carlos Baccerra Zambada aka: Juan Becerra-Manjarrez, as two suppliers and coordinators of large amounts of Methamphetamine into Greenville, SC and Birmingham, Alabama.  Investigators with GCMDEU conducted surveillance Sunday afternoon (November 24) in Greenville County attempting to effect the arrest of the individuals.  Detectives successfully located the two at a residence on Lamont Lane, just off Hwy. 81, in Greenville County, where the two were taken into custody.

“When the new Drug Enforcement Unit was created I envisioned a team of investigators from multiple agencies working in unison to tackle large scale drug operations that are affecting the people of our community. I am so proud that our team did just that with this recent operation. I hope this sends a clear message to any other drug dealers in and around the upstate of South Carolina that the GCMDEU is up, running and are coming for you in full force.” stated Sheriff Johnny Mack Brown.
Prior to Sunday, GCMDEU Investigators had recovered a pound of methamphetamine sold by one of the suspects in Greenville.  The investigation tracked this sale directly to the suspect while also identifying the suspects having direct ties to Sinaloa, Mexico.  Commander McEntire states, “While the investigation cannot 100% confirm the two suspects were directly involved with a cartel organization in Mexico, the amount of narcotics being moved, the documented ties uncovered to Sinaloa, and the way US currency located in this investigation was hidden, definitely raise suspicion that the suspects were moving narcotics for a cartel organization.”

The enforcement action culminated Sunday night and went into Monday.  Through the lengthy investigation, in addition to the earlier mentioned pound of methamphetamine, investigators recovered almost 6 pounds of methamphetamine, cocaine, and approximately $7,500 in U.S. currency from the residence in Greenville.

The investigation took DEU investigators to Birmingham, Alabama where investigators relayed Information to the Jefferson County Sheriff’s Office regarding suspected narcotic distribution.
On Monday, November 25, 2019, the Jefferson County Sheriff’s Office Narcotics Unit obtained search warrants for two residences in Birmingham.  The search warrants were based on the information that was relayed to them from the DEU as well as information uncovered during the JCSO Narcotics Unit investigation. During a search of the two drug locations the JCSO located and seized an additional 68 grams of methamphetamine, 74 grams of oxycodone tablets (equates to approximately 450 tablets), 3 grams of cocaine, $23,206.00 in U.S. currency, and three firearms.    Two persons were arrested at the locations in Alabama.
As warned in the kick-off press conference in August, Bart McEntire, Commander of the GCMDEU stated “The gloves are off.  DE has united under one umbrella to combat illicit drug trafficking.  The invisible boundaries of jurisdictional lines no longer exist.  We will pursue individuals supplying illicit narcotics within Greenville County where ever they go.  This investigation is a strong example of the cooperation, perseverance, and abilities of the newly formed GCMDEU.  The criminal element has continually exploited city, county, and state boundaries to thwart justice from being carried out but no longer.”  Commander McEntire further stated, “The two individuals supplied multiple kilo amounts of methamphetamine into the Greenville market on a regular basis prior to the disruption of this pipeline of narcotic misery.  The seized amounts of methamphetamine equates to more than 3,000 individual dosages of methamphetamine to drug users.   With this seizure, we prevented the potential of the drug being abused and potentially causing the chances of an overdose 3,000 times.  The amount of narcotics seized easily would have allowed a drug user to inhale, inject, or ingest on at least 3,000 separate occasions.”