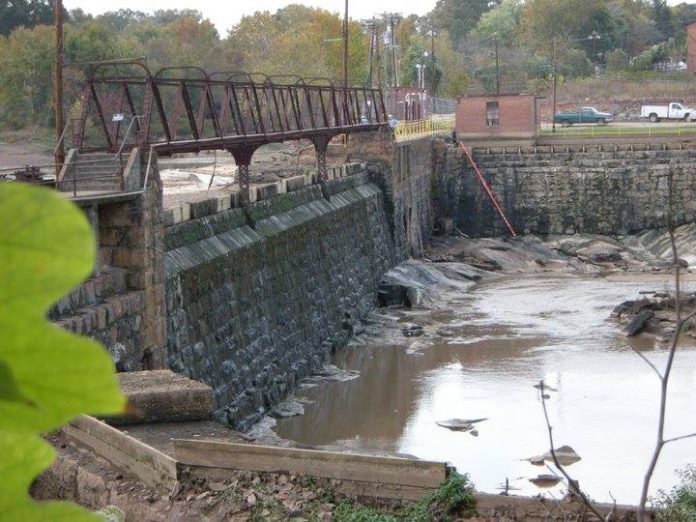 If you have been through Piedmont recently, you may have noticed blue ribbons on the Hwy. 86 bridge. After the recent loss of the historic footbridge and in anticipation of the upcoming Discover Piedmont Day, the ribbons were placed on the bridge “to show solidarity for the mill village’s history and for its bright future,” said Anne Peden, President of the Piedmont Historical Preservation Society.
In early 2018, Preservation South Carolina released a list of the most At Risk historical sites in the state.  Piedmont’s Footbridge was among the eight properties listed. The Piedmont Historical Preservation Society soon began an effort to restore the historic structure.
On Thursday, February 6th, at about 5 pm, debris floating down the rain swollen Saluda River hit the historic Footbridge, and took it down.
The dam and footbridge were constructed in 1888 when the Piedmont Manufacturing Company built their third plant on the Anderson County side of the river.  The footbridge allowed quick movement by operatives from Mills 1 and 2 to Mill 3 and back.  The footbridge, dam, and smoke stacks were main structures left
When the flood waters finally went down the next day, the tangled steel mess at the bottom of the dam was all that was left of one of the last reminders of Piedmont’s textile heritage.
Anne Peden  was among a number of people who stopped to see the river and photograph the dam as the flood water rushed over.
\
“I had been there earlier in the day but had gone home to watch the news again,” Peden said. “Checking Facebook, a friend had just posted the devastating photo of the dam without the bridge.   Shock took over , the phone started ringing, and realization set in.”
Peden said, “After going back to downtown and taking in the view, those of us who love that bridge began to grieve.  Tears were shed, memories shared, and wishes voiced.  For hours the bridge was covered completely by the waters, and when she finally surfaced the following day, the view of her tangled steel split our hearts.”
“Everyone wants to do something, to remember the ties that bind the two sides of the village together, and to memorialize Piedmont Manufacturing Company’s heart – the Footbridge,” Peden said.
Efforts to restore the footbridge that have gone on for years with the latest effort starting with that At Risk designation.  The counties’ administrators, councilmen, and recreation departments with both Anderson County and Greenville County began discussions with the power company, and talks went on for months, but no real progress happened.
“This failure weighs heavily now,” Peden said. “Thus, Piedmont locals need to help these groups see the benefits of working together for progress instead of allowing inaction to be the decision-maker.”
“To show solidarity for the mill village’s history and for its bright future, Piedmont blue ribbons were placed on the Hwy. 86 bridge, and we hope they will last until Discover Piedmont Day on March 7th.”
On March 7, The Piedmont Historical Preservation Society will sponsor the 2nd Discover Piedmont Day with memories of the Footbridge in the museum, a 3 on 3 Basketball Tournament in the gym, crafts in the Rowell Club Room, and gospel singing in the gym in the afternoon.
There will be food, breakfast by the Black Sheep Café, hotdog lunch by the society, and food trucks in the afternoon.  “This celebration of our heritage will be cathartic and forward looking.
There is much to hope for – for the bridge as our major symbol, for the revitalization of the mill village up coming, and for the continued dedication to preserve Piedmont’s rich history.    Please pray for a positive outcome to this tragedy and for unity for Piedmont.   Thank you for supporting our efforts.”