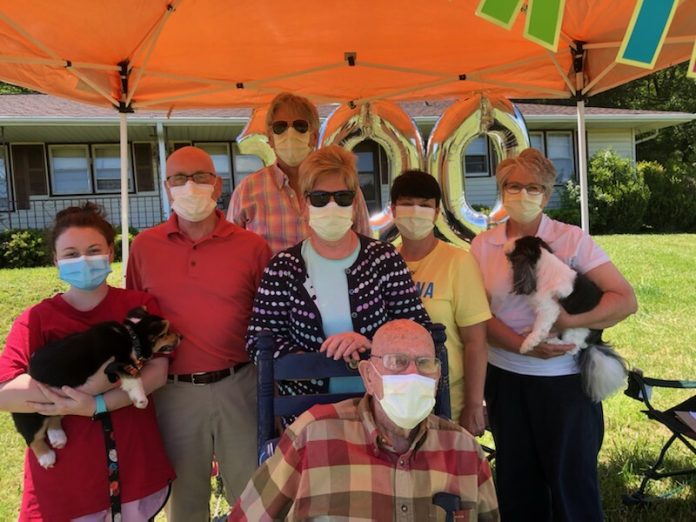 On Friday, Apr. 24, members of Beaverdam Baptist Church organized a parade to honor Wayne Rogers on his 100th birthday. The parade included many vehicles with church members holding signs, balloons and flags, a float with and children waiving flags and banners. The parade was lead by Anderson County Sheriff’s Deputies and Sheriff Chad McBride.
Rogers and family members sat under a tent and watched as the well wishers drove by. Participants signed a registry which had over four pages of names.
Beaverdam Baptist Church columnist Catherine Weaver has more about the parade in her column in the Apr. 29 print and online edition of The Journal. Members of the Men United Prayer Group (pictured above) also participated.
Born April 24, 1920, Wayne grew up in the Beaverdam and White Plains communities in Williamston.  When his father died during the depression, Wayne knew if he didn’t do something, his mother could very possibly lose their farm so after high school graduation , he joined the US Navy in 1939.  He first served in the North Atlantic and then after the bombing of Pearl Harbor, served in the South Pacific.  While there he survived the deadly consequences after a Japanese submarine rammed a fully loaded ammunition ship which was anchored near his own ship, the USN Mindanao.  In 1946, he was honorably discharged with the rank of Chief Petty Officer, EM.
Upon returning home, Wayne married his childhood sweetheart, Irene Dickerson Rogers (Order of the Silver Crescent recipient June 19, 2001) and enrolled in Furman University, graduating in 1949 with a degree in biology and chemistry.  He became a science teacher at the time.  He again enrolled in Furman in 1959 to pursue a Masters Degree in school administration.  After gaining his masters, Wayne served as principal in several Anderson School District One schools until retiring in 1982 after a 33 year career.
During the time of his education career he also served in the SC National Guard from 1949-1960 resigning at the rank of Major, as well as serving in the US Army Reserves 1960-1982.  Many summers during his break from public school responsibilities, Wayne would travel to Fort Bliss in El Paso, Texas to teach missile defense.  He retired from the reserves in 1982 as a Lt. Colonel.
Retirement from education and military service did not mean retirement from serving.  Wayne had always been active at Beaverdam Baptist Church where he attended from infancy until today.  He served in many capacities:  as a deacon multiple times, frequently serving as chairman from 1948-2009; Sunday School director, Training Union director, and on multiple committees; and he served many years as the choir director/song leader.  It only made sense after retirement and with more available time that he continue his “church” work through the Southern Baptist International Mission Board, the Southern Baptist Home Mission Board and South Carolina State Missions.  Over the course of the next 20+ years, Wayne traveled to the following countries to volunteer his electrical skills to wire remote churches, camps and orphanages; Panama, Haiti, Peru, The Philippines, Romania, Siberia, Kyrgyzstan, Ireland, Kenya, Russia, and Brazil.  Wayne also volunteered mission work in Kentucky, Hawaii, Alaska, West Virginia and in South Carolina.  For his work in Kentucky, He was honored as a Kentucky Colonel in January 2006.
On the community level from 1970-2016, Wayne served on the Board of Directors for the Big Creek Water District after being extremely instrumental in developing a plan to bring “city” water to the rural areas near Williamston and Pelzer.  He was also a member of the Saluda Valley Sertoma Club in the 1980s.