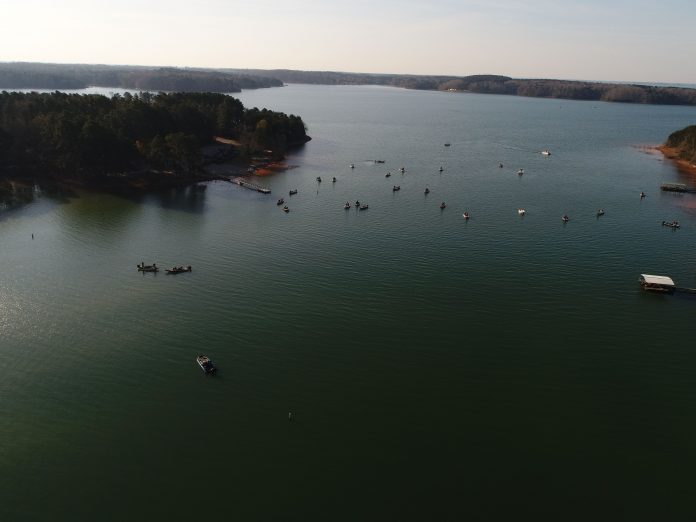 The country’s best college anglers will resume their quest for a national championship title and Bassmaster Classic berth on Lake Hartwell when the Carhartt Bassmaster College Series presented by Bass Pro Shops competes on this South Carolina fishery Aug. 27-29.

According to Bassmaster Elite Series angler Jason Williamson, of Wagener, S.C., Lake Hartwell will produce plenty of action for the college competitors during the dog days of summer if they key on spotted bass in deep water.

“There are residential fish that live shallow around boat docks year-round,” Williamson said. “The predominant summer pattern, though, will be fishing deeper around brush or cane piles 18 to 30 feet (deep). It is a spotted bass lake, so you can catch those fish out to 40 to 50 feet.”

Williamson suggests the most productive lures for deep fish will be green pumpkin or watermelon Zoom Swamp Crawlers on drop-shot rigs, football jigs, shaky-head worms or Texas-rigged Zoom Ol’ Monster worms. “There could be some schooling activity over the cane piles, so you will need some type of herring-imitation bait, such as a topwater lure or Fluke, ready for that type of bite,” he said.

“There could be an early morning buzzbait bite that could come into play,” Williamson said. “It’ll be tropical storm season, so there could be a tropical storm, hurricane or depression, which is a game changer that time of year on these herring lakes. It could end up with three or four days of cloudy, windy weather, which really turns on a shallow bite, so you can throw a buzzbait or spinnerbait in the wind.”

College anglers running up the Seneca or Tugaloo River could catch largemouth bass on crankbaits in the dirty water or by flipping to docks and shallow wood. However, Williamson notes the lower end of the lake will produce more consistent catches throughout the three days of competition. “You could have somebody run up the river and catch a good bag one day, but it is going to be hard to duplicate that for multiple days,” Williamson said.

Daily takeoffs will be at 6:45 a.m. ET from Green Pond Landing in Anderson. Weigh-ins will be held back in the same location each day at 2:45 p.m. In addition to prize money for their team, the winning duo will earn a spot in the College Series National Championship. The Top 4 teams from the College Championship will earn a chance to compete for a berth in the 2021 Academy Sports + Outdoors Bassmaster Classic at November’s Carhartt Bassmaster College Series Classic Bracket Challenge on Alabama’s Lay Lake.

“Anderson County has done a tremendous job during this most difficult time to ensure the safety of our community, and we will extend that same effort and passion into welcoming B.A.S.S., the anglers and their families,” said Neil Paul, Executive Director of Visit Anderson. “We have been blessed with a tremendous fishery, great facilities and a very supportive fishing community, and we look forward to hosting these young anglers.”