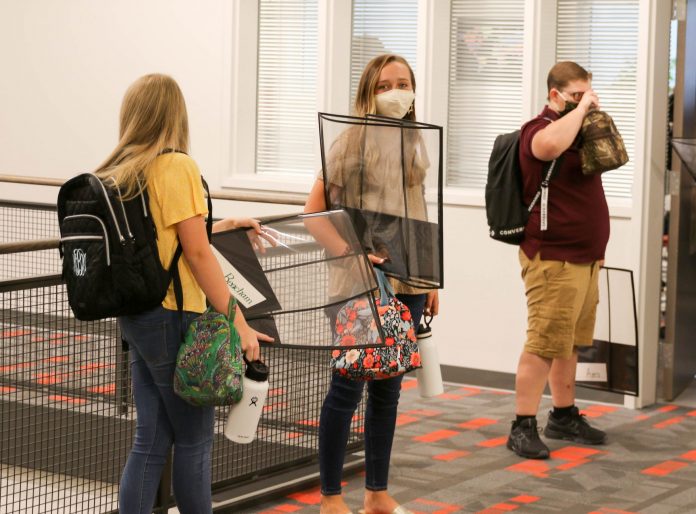 Anderson School District One students and teachers went back to school last week with face to face and virtual learning, staggered attendance, hybrid schedules and special protocols to deal with the COVID-19 situation.
From temperature checks outside school buildings and to students have assigned classroom to classroom seating, desk shields, masks and other guidelines while inside.
District One Board members heard an update on the start of school during the pandemic at their meeting Tuesday.
Superintendent Robbie Binnicker said the opening of school “went remarkably well considering all of the new policies and procedures.” Binnicker said there were some glitches but masks were a non-issue.
“Every student brought a mask and every student wore a mask,” he said. “There were not a lot of issues at all.”
“It is a testament to our kids and our parents. Temperature checks went great and social distancing went well.”
Binnicker said that students in middle and high schools changed classes, they were in single file lines, and at least five feet away from each other. “It was so surreal to see middle and high school students doing this,” he said.
Binnicker said that with the hybrid schedule, about a third of the elementary students and half of the middle and high school students attended the first day of class on Tuesday and Wednesday. The others will come Thursday and Friday.
Binnicker said parents like the staggered schedule and indicated they would like to do it every year.
With fewer students in classes, teacher reported that the rules and regulations under the COVID protocol went very well.
Binnicker said the hybrid schedule also caused less problems with first day traffic. There was an issue with bus transportation regarding bus stops for students who were not on the preliminary list, however Binnicker said the 67% capacity was not a problem due to the staggered schedule but that it could be on Friday when all students will be in attendance.
Learning included face to face and online.
There were some glitches with the online virtual learning. According to Binnicker, some students were not online or couldn’t get online.
As far as COVID cases, Binnicker said there were zero reported cases of COVID on Tuesday. He said the protocols implemented by the district for back to school had apparently mitigated the situation.
Anderson School District One is among schools posting the number positive cases of COVID-19 related to the school district on their website.
Binnicker said information is being provided daily on the District One website “so parents, employees and the community can get a good sense of what is going on in the schools” and not get it from rumors.

Assistant Superintendent of Instruction Jane Harrison reported that “Teachers were very anxious about returning to class” but the stress levels went away when they were face to face teaching students on the first day.
She said things went smoother than expected for the virtual learning. Teachers were able to meet and asses students online with zoom or webex meetings, she said.
Harrison added that “we had great momentum” but when schools were closed March 15, “it all stopped.”
“We were very skeptical we would be able to get that momentum back,” she said.
“We felt today our plans were working. We picked up today where we stopped in March.”
Harrison said wearing masks was second nature for the students. “It is something different for them now. That may change.”
Harrison said that elearning that the district had before COVID and the new format for virtual learning is very different. She said the teaching through virtual learning is very organized and the same for all grades.
She said the district did need some items for the virtual learning. They purchased some document cameras and microphones for teachers to help with sound due to masks. They also purchased real books needed for virtual students, some software, and added personnel to help with the online program.
She said there was an internet issue with webex, the program used for the online meeting/classes. According to Harrison, the software company updated their program on the first day of class, which impacted access for some classrooms.

Responding to a question by board member Mike Wilson, Binnicker addressed attendance for fall sports.
The Superintendent said the High School League has sent a letter to the State Commerce Department requesting and exception on attendance requirements, asking for it to be changed to allow fifty percent of seating capacity.
He said Anderson County guidelines currently allow for a 50% seating capacity. For football games, he said the band could be spaced on the track to allow more seating in the stands.
“Football provides the vast majority of revenues to attendance is important,” Binnicker said. He said safety is priority. “We want to be comfortable with the plan we create to get fans in the stands.” He said the close contact sports football, cheer and wrestling “are the most difficult.”