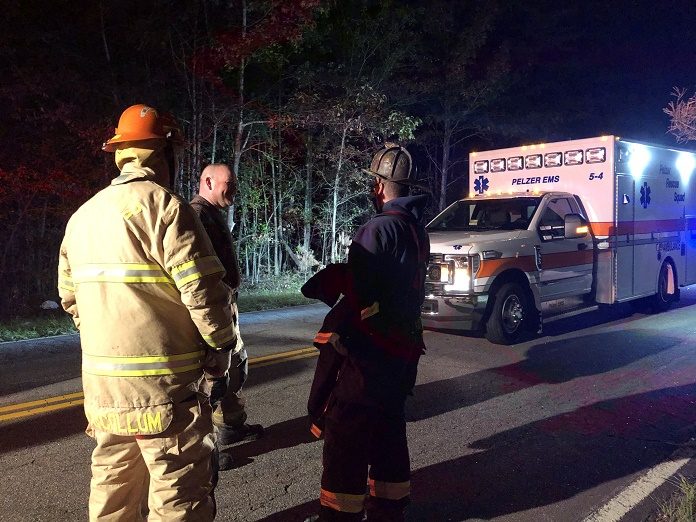 Cheddar firefighters and Pelzer EMS personnel work at the scene of a fatal pedestrian wreck Sunday night. It happened on Big Creek Road just south of Williamston. The man was struck by a pickup truck. The driver of the truck was not injured. (Photo by David Rogers)

The Anderson County Coroner’s office is currently investigating an accident in which a pedestrian was struck and killed Sunday night on Big Creek Road. The accident occurred around 8 pm in the 1800 block of Big Creek Road, Belton. Belton EMS, Anderson County Fire Department, the South Carolina Highway Patrol and the Office of the Coroner responded to the scene.
Brent Simpson, Deputy Coroner identified the victim as Benji Michael Brock, 41, of Belton. The victim was pronounced deceased at the scene due to Multiple Traumatic Injuries Secondary to Blunt Force Trauma.
The investigation indicates that the decedent was walking on Big Creek Road after leaving his residence and was struck by a pick-up truck. The investigation is ongoing by the Anderson County Office of the Coroner and the South Carolina Highway Patrol.