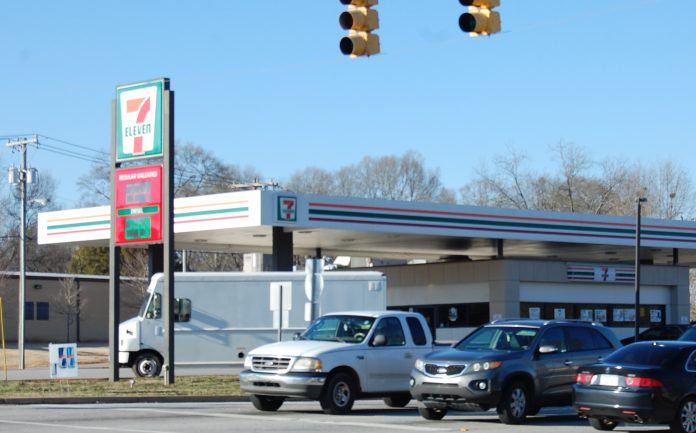 By Stan Welch
A dispute which the mayors of both towns acknowledge is nothing new has arisen once again between Pelzer and West Pelzer. The dispute centers around the location of the 7-Eleven convenience store at the intersections of Highways 8 and 20. At issue is which town is entitled to the hospitality tax revenues generated by the sale of prepared foods at that location.
West Pelzer has been collecting the approximately three hundred dollars a month in hospitality taxes since they enacted a hospitality tax. Mayor Blake Sanders says that the town also provides infrastructure, such as utilities; and public services, such as the presence of the West Pelzer Police Department (WPPD) when legal or public safety incidents occur at the location.
“We have established a traditional and historical value for the revenues received. Frankly, we provide services that the town of Pelzer cannot. Our presence, our claim is both prior and well established.”
Pelzer Mayor Will Ragland, who was elected in November, acknowledges that prior to the extensive annexation of property by the town several years ago, the town’s limits probably didn’t extend that far. But after the annexation, Pelzer included the property up to the boundary between the two towns. Ragland says that he was approached by several citizens about the issue of the tax revenues, as well as the jurisdiction of the WPPD at the store. “I got tired of being unable to give them a definite answer,” he said in an interview with The Journal.
Ragland says he approached Sanders and sought a clarification of the situation. According to Ragland, no satisfactory resolution was offered. “I just asked if they had annexed the location, which was sometimes heard to be the case. But it wasn’t. An agreement was apparently made between the town and the corporation during former mayor Peggy Paxton’s tenure, but no annexation took place.”
Ragland then researched several maps that indicated that the boundary of the two towns actually ran through the property, but that the store was in Pelzer’s limits. He confirmed the maps’ accuracy with the county, and determined that his town was entitled to the tax monies. Since the town has no authority to collect taxes on property, and has only three other sources of hospitality tax funds – two restaurant and the deli at the Bi-Lo, the addition of the $3600 a year was significant.
Ragland, without notifying West Pelzer, instructed Cheryl Boudreau, the town clerk, to send a letter to the management of the 7-Eleven, informing them of his discovery and explaining that West Pelzer should no longer receive the monthly check for the taxes. Sanders says the first he knew of it was when the December tax check didn’t arrive.
“We didn’t think a lot of it, because it was the holiday season and all. But when the January check didn’t come either, we contacted the store. That’s how we found out that Mayor Ragland had been working behind the scenes on an issue that we didn’t really consider an issue, given our established relationship with the store, and our providing of the various services.” While West Pelzer has several sources of hospitality taxes, Sanders had other concerns, which he raised with Ragland. Among them was the town’s securing of various loans, based on their tax base. “If we lose the property taxes on that store, that could affect the collateral on some of those arrangements. Pelzer can’t even collect those property taxes, because they have no means to implement a municipal property tax.”
He pointed out that West Pelzer also has a municipal business license fee structure, which Pelzer does not. “This goes beyond just that three hundred dollars a month. It messes with our town’s business, without so much as a how do you do.”
As a result, Sanders and the town have approached the Municipal Association as well as the Attorney General’s Office for clarification, or in the AG’s case, a formal ruling on the situation.
While both mayors, who along with Williamston Mayor Rockey Burgess, have been getting the nickname “the Tree Amigos” because of a growing spirit of cooperation between the towns, agree that the issue is likely to wind up in court, they both asserted that their personal and political relationships are intact and cordial.