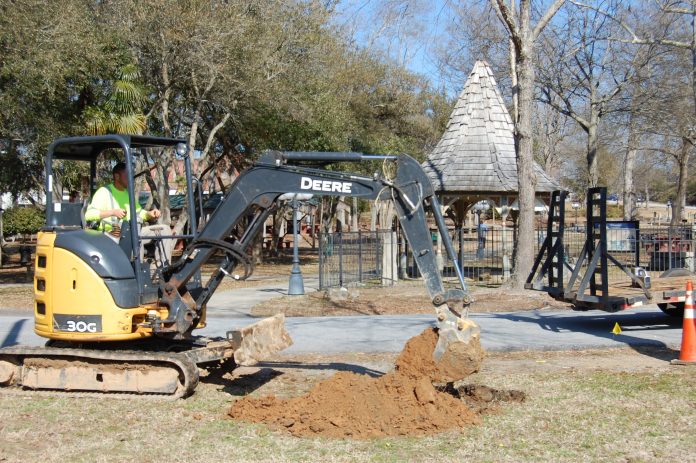 The Town of Williamston is making some improvements in Williamston’s Mineral Spring Park including electrical upgrades, restrooms and the tennis court area.
Williamston Mayor Rockey Burgess said six new 50 amp electrical hookups are being installed in the area where food vendors are located during the Springwater Festival and other events. The upgraded “RV” outlets will allow food vendors, or RVs, access to power to run equipment and air conditioners, Burgess said.
The original scope of work was to add four 50 Amp pedestals to the creek side of the park at the entrance for food service trucks and vendors. The total cost on the original scope of work was $14,500. $10,000 will come from PARD Grant and the remaining $4,500 would come from the town’s Hospitality Tax fund. At the request of Spring Water Festival organizers, two additional 50 Amp pedestals were added on the opposite side of the road (same side as old restrooms). Burgess said the cost for the two additional pedestals and two additional circuits is $2,950 while the equipment was already on-site. “It would be much more expensive to add later,” Burgess said. The additional funding will come from Hospitality Tax, he said.
Boring for the new electrical lines was underway Tuesday. Spring Water Festival Chairman David Meade said the old electrical grid in the park was originally designed for Christmas lights and decorations and the power needs of food vendors and trucks is much greater today. The electrical situation has caused problems with breakers being tripped causing power outages during festivals in the past.
“This is a great improvement to the electrical infrastructure in the park and will take care of a big problem we have faced through the years,” he said.
Burgess said the town is also planning to make improvements to the old restroom facility located at the entrance to the park. A new concrete walk, doors and entrance and improvements to restroom and sink facilities inside will make them useable again, he said.
Mayor Burgess said the old restroom building is structurally sound and the improvements will make a big difference.
The restrooms have not been open for use in years, with portojons being brought in and placed at the location for festivals. They will only be open for events and festivals. The restrooms on the back side of the park will also see more cleaning and will remain open as they are currently, the mayor said.
The old fencing at the tennis courts was removed last week and Burgess said he is considering converting them to pickleball courts. According to Wikipedia, Pickleball is a paddleball sport that combines elements of badminton, table tennis, and tennis. Two or four players use solid paddles made of wood or composite materials to hit a perforated polymer ball, much like a wiffle ball, with 26-40 round holes, over a net.
Mayor Burgess said other improvements along Main Street are coming soon including flashing lights at the crosswalk on East Main, safety markings on the bulb outs along West Main Street and filling potholes.

Pictured below – Old fencing and lighting around the tennis court area in Mineral Spring Park has been removed. Workers also burned off some brush on the old rail embankment. The Williamston Fire Department stood by while burning was underway.