Williamston Police Officers investigated the following incidents:
April 1 – Ptl. M. B. Jackson received an anonymous tip about two people who were on railroad property, throwing rocks at the train. The tip included detailed descriptions of the two subjects, whom he quickly encountered at Mineral Springs Park. Upon Officer4 Jackson’s approach, Jonathan Andrew Monterrio Brown, BM, 20, 5’4”, 132 lbs. and Alyson Mae Thompson, WF, 5’1”, 140 pounds both admitted throwing rocks at the train, with Brown saying he was bored and had nothing else to do. Officer Jackson contacted W.A. Striewing, security officer for the Western Greenville Railroad, who advised he wished to press charges. The two subjects were cited for malicious mischief and released. The next day, Officer J. West was summoned to the train yard, and was shown damage to the conductor’s side window, mirrors and windshield .
April 2 – Officer R. Drennon was called by an employee of the Community First bank concerning a customer trying to cash a stolen check at the drive thru window. Upon arrival, he saw the suspect vehicle, a white F350 pickup truck. He radioed the tag number in, but while he was waiting, the truck left and he followed. Upon receiving confirmation that the truck was reported stolen, he initiated a traffic stop. The driver refused to stop and fled down S. Hamilton Street at a high rate of speed. Sgt. Mutz instructed Officer Drennon to abandon the chase, which he did.
April 3 – Ptl. J.D. Hayes received a telephone complaint from James McDuffie, of CSE Properties, of the theft of approximately $500 worth of lumber from 33 Ridge Court, the site of a new home construction.
April 4 – Ptl. J.D. Hayes responded to 104 Davis St. where Jerry Hill reported that someone had driven into their fence and mailbox, damaging both. The damage was estimated at $140.00. 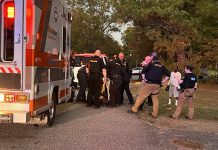 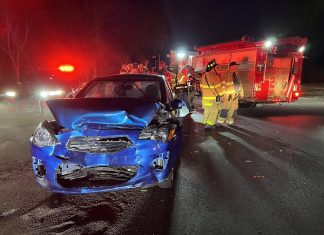