By Stan Welch
The 2020 U.S. Census is complete and some of the political impacts are now known. At the national level, the census counted 331,449, 281 Americans. That number reflects a remarkably sluggish growth rate; up only 7.4% from 2010. That rate of growth was second only to the even lower rate during the years of the Great Depression. According to a Congressionally approved formula, as described under Section 2 of the United States Code of laws, there will be several changes in the House of Representatives. The House is the chamber affected by changes in population and its distribution. The number of Senators is set by the Constitution at two per state.
However, based on the changes in population distribution, and the fact that several states lost population, while others gained it, seven states ( CA, ILL, MI, NY, OH,PA and WV) will each lose one Congressional seat, while six states (TX,CO, FL, MT, NC and OR) will gain seat, with Texas gaining two, and the others gaining one each. South Carolina will remain static, even though it outgrew its neighbor to the north..
Closer to home, the Palmetto State saw a much higher growth rate than the national rate of 7 per cent. Gaining 10.3 per cent of its previous population, S.C. added almost a half million people; up from 4,645,975 to 5,124,712. The numbers reflecting the distribution of those increases have yet to be released, but Steve Newton, director of government affairs for Anderson County, says that recent indications have been that the state is becoming more urbanized. “Cities like Charleston and Greenville and Columbia, as well as the smaller coastal cities, are attracting more and more of the transplants moving to the state. South Carolina’s unprecedented success in attracting industry to our state is also contributing to the tendency for population clusters nearer the urban and increasingly industrialized areas.”
Further evidence of the changing population distribution is the growth of counties adjacent to those urban areas; such as Anderson, which has a very fast growing area in Powdersville, which abuts Greenville, or Berkeley County just west of Charleston, where the Boeing plant has had an enormous impact on both political and social aspects of the area.
South Carolina also has a formula to determine how many residents comprise a district. A South Carolina Congressman, like Jeff Duncan, will now represent 732,102 South Carolinians. In light of the urbanization of the population, Duncan’s District Three may shrink just a bit geographically. 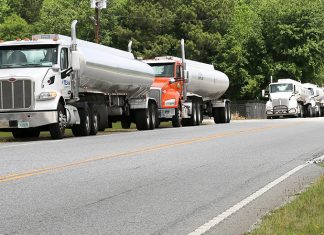 Journal - May 12, 2021
0
Keep it coming - Tanker trucks line up for refilling at the Tank Farms in Belton as drivers work overtime transporting gasoline to help...